Agri-parks cooperative a voice for the deaf community 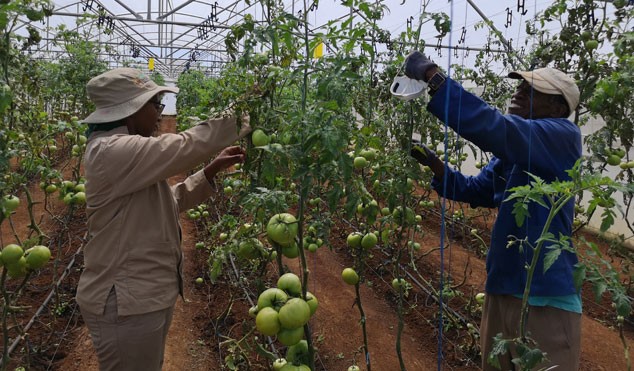 The Voice Out Deaf Cooperative is one of the five cooperatives found in the Rand West Agri-park, which is one of the agri-parks that has been on full operation for more than two years.

Matebogo Victoria, a member of Voice Out Deaf Cooperative, said the main aim of the cooperative was to create jobs and employment opportunities for the deaf community.

But overall, she said, the objective of the project is in line with the government agricultural policy of increasing food production and attaining sustainable food security and subsequent poverty reduction.

So far, Voice Out Deaf has managed to create about seven jobs.

“The popular vegetables will become available throughout the year at affordable prices,” she said.

Victoria said there were many advantages to using the state-of-the-art agricultural facility to grow vegetables. This includes irrigation facilities, effective time for production, modern machinery like tractors used in farming to make ploughing and harvesting faster, and it helps to yield a high quantity of crops.

The cooperative sells its products to the local fruit and veg market, street vendors and local residents.

Victoria said when the cooperative started two years ago it was difficult to access the market.

“Access to market is no longer a problem. Instead, we have more market than what we produce,” she said.

However, she acknowledged that it is generally difficult for people living with hearing impairment to do business as many customers struggle to communicate with them.

“Compared to people who are hearing, the deaf population faces notable challenges in finding jobs as well,” she added.

She said the cooperative plans to improve the quality of food produced in South Africa in future, and to offer horticultural training for farmers in the Rand West.

“We also want to explore the ever-growing demand for food in South Africa, to increase the Gross Domestic Product (GDP) of South Africa, to create job opportunity for local youths in the Rand West, and to introduce modern farming techniques to deaf people in our area,” she said.

Knitting machine operators process cotton, wool and similar forms of yarn into clothing, scarves and other articles.
SebenzaLIVE
2 years ago
Next Article