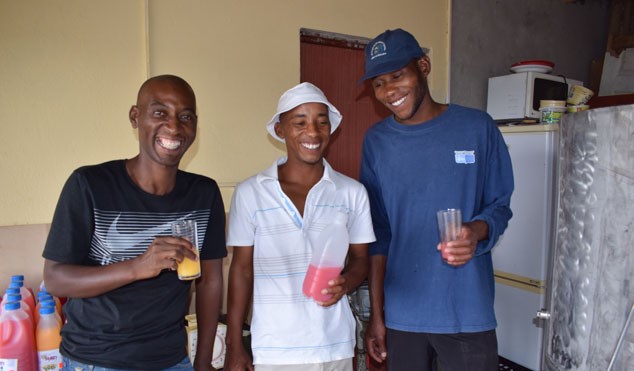 The 36-year-old Modikeng Makhele, owns a juice manufacturing business called Buta Industries, which operates from the garage of his home in Botshabelo in the Free State. The company produces fruit juice, fruit nectar, cordials and dairy blends.

Equipped with a food biotechnology degree from the University of the Free State, Makhele left his job at a soft drink manufacturing company in Johannesburg in 2011 to become his own boss.

Five years later, however, financial challenges forced the company to its knees. Makhele battled to pay his rent and salaries.

“I felt embarrassed and frustrated. I even thought of giving up and returning to the corporate world.”

He refused to let his dream die, however.

In 2017, he managed to revitalise his business and opted to run the company from his home garage. He also managed to boost his clientele, which includes supermarkets, tuckshops and individual households.

“I have this burning desire pushing me to see my vision of owning a successful company come true. Waiting for someone to assist me to grow my business is a waste of time. I want to grow this business myself,” he said.

Makhele said one of his biggest achievements was his ability to revive his company and enter the tough Bloemfontein retail market.

“The fact that we create quality products has ensured that we have loyal customers.”

He said one of his biggest lessons in entrepreneurship was the power of planning and managing money.

“We started with renting a huge factory and that didn’t work out. We have learnt to start with small steps to get us to where we want to be,” he said.

Here's how accountants make sure that taxes are paid properly

An accountant's job is to compile, analyze, and evaluate financial information.
SebenzaLIVE
3 years ago

Unless you are JK Rowling, Stephen King or Robin Sharma you can’t always guarantee that being a published author will guarantee you fortunes.
SebenzaLIVE
3 years ago

When Kgomotso Thebe became the manager of Jehovah Jirah Orphanage Centre, which was started by her mother, she realised funding was a problem.
SebenzaLIVE
3 years ago
Next Article