Zandile Ndhlovu, SA’s first Black African free-diving instructor, is our Woman of the Year in sports 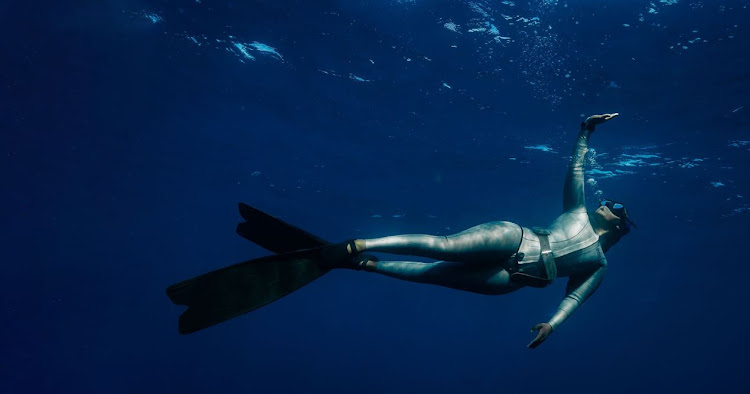 It takes a special type of person to switch from the relative mundanity of the boardroom to the opposite of the spectrum — free diving.

The chances of this happening are even slimmer if you happen to be Black and female in South Africa, and you want to pursue a career that has anything to with water or aquatics. Yet 33-year-old Zandile Ndhlovu managed to morph into the “Black mermaid”, literally taking to the deep end of the ocean.

She is the country’s first Black African free-diving instructor and the founder of the Black Mermaid Foundation, which seeks to create diversity in the marine world.

“I believe I’m the first Black female, Black African person in that world, but I do not want to be the only one. I’m dedicated to making sure I share my heart space, my passion for the underworld, with children who, like myself, were never given the opportunity to be exposed to that world,” Ndhlovu explains.

Her journey — from being a girl in Protea North, Soweto, to donning a power suit and running a consultancy company with two partners to relocating to Cape Town and slipping into a wetsuit — is evidence of how true purpose can find you, no matter how unforeseen.

“I grew up in Soweto, nowhere near the sea. The most I would see it was once or twice a year, when we went to visit my mom’s side of the family in the Eastern Cape. But even then we did nothing beyond splashing in the shallows. I didn’t learn how to swim until I was 15, and even then I did not learn traditionally. I taught myself how to swim,” she says. 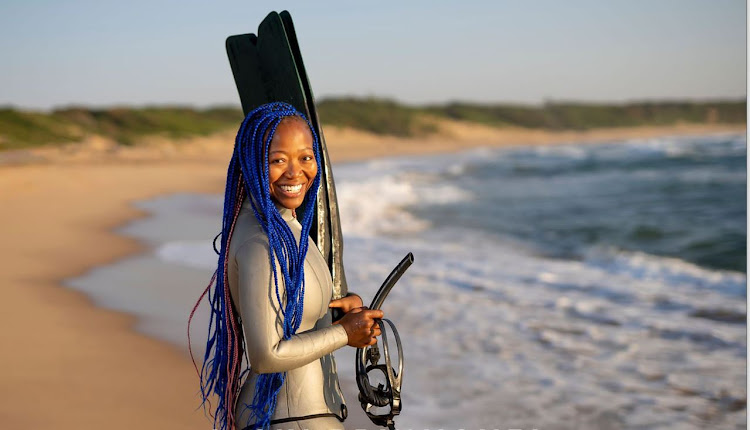 At first, the trajectory of her life went as expected — she finished school, attended a tertiary institution, and entered the workforce. She was chugging along until she took a fateful trip to Bali almost six years ago.

“We were doing really well at work, specialising in human resources, industrial relations, diversity, and inclusion in the power sector. And then, in 2016, I went to Bali to clear my head. In my second week there, I went snorkelling, which was something I had never done before.

I had no idea what to do, and had the lady seated next to me not explained everything to me, I’m not sure what would have happened to me. Remember, I’m just a girl from Soweto, and have had no type of privilege — everything has been new to me,” she laughs.

That first foray gave her a glimpse of a world she never knew existed, and her life was changed forever.

“I had an opportunity to see beyond the water, and it was incredible. From the onset, I was enveloped by a strong sense of belonging, the most intense I had ever felt in my life. Until that point I was like everyone else — as humans we define ourselves by our titles, our jobs, and things of that nature, and are afraid to be new in anything. We are afraid to explore the identifiers to which we cling, which is understandable because it’s frightening to start somewhere as the new guy,” Ndhlovu says. 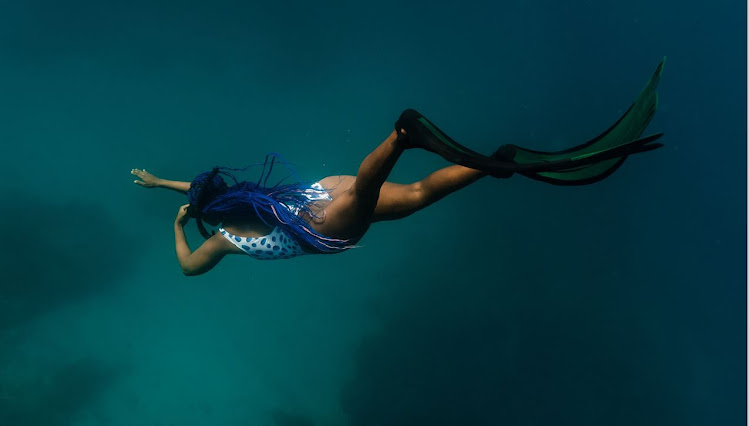 In 2020, she qualified as a diving instructor, but then the country went into lockdown and, like most people, she had some thinking to do.

“I did not know it at the time, but I had to pause and realise I did not want to be small anymore. I was hosting digital conversations with over 50 divers all over the world, people of colour, and I realised that I needed to create a space for Black bodies to exist. That is how the foundation was birthed.”

One of the core values of the foundation is using outside-the-box perspectives to help people break through barriers and challenges, overcome doubts, and take strides towards achieving their goals. She is about to tell me how she feels about her role as a changemaker when a deafening sound explodes through our Zoom exchange, and the “Black mermaid” bids me a hasty goodbye — duty calls.

Ndhlovu is shooting an underwater film, which takes her out to sea for most of the day. The dynamo, who writes and directs the story herself, says the film, which was commissioned by a streaming platform, is about exploring fear and reverence for nature, and her relationship with the sea.

We resume our chat when all is clear, and Ndhlovu expands on her devotion to giving Black children a chance to explore the aquatic world. 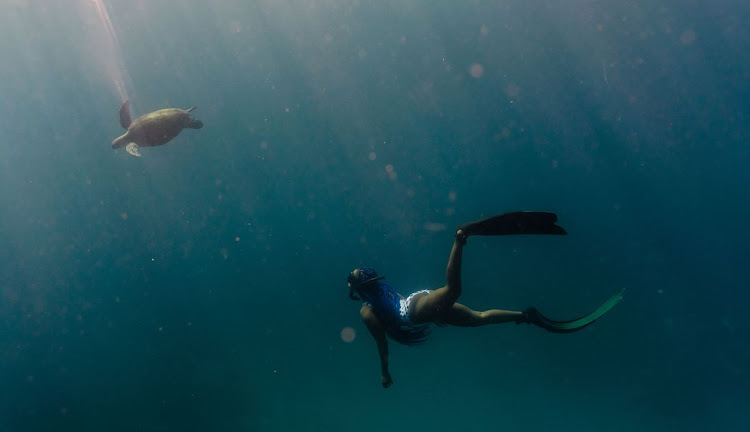 “As Black people, we never truly get an opportunity to be fully children — there is always something, be it extreme poverty, abuse, access, systemic exclusion, and so on. When I take them out, the sea belongs to them. I want them to not be afraid; I tell them it’s a place where they belong. To open up the world of possibilities for them and allow them to dream of themselves as marine biologists, or Olympic swimmers and divers. I just want us to regard it as part of our lives,” she says.

“I've always dreamt of making a positive impact in the lives of others, and I am the happiest whenever I can inspire, motive, and challenge others, from all types of backgrounds, simply by being.”

And Ndhlovu is not speaking as some kind of privileged heiress when she delves into the complications of going after her dreams while the bills still have to paid.

“As Black people, survival has been our priority; you always had to make that money. It’s drilled into us to make sure that we’re okay, that the family is okay. A level of insanity is required to do what I did. But even when I didn’t know how I was going to pay the rent, I persevered.”

On her foundation’s website, Ndhlovu describes herself as “an advocate of wonder, exploration and awe”. Her life certainly fits that description. 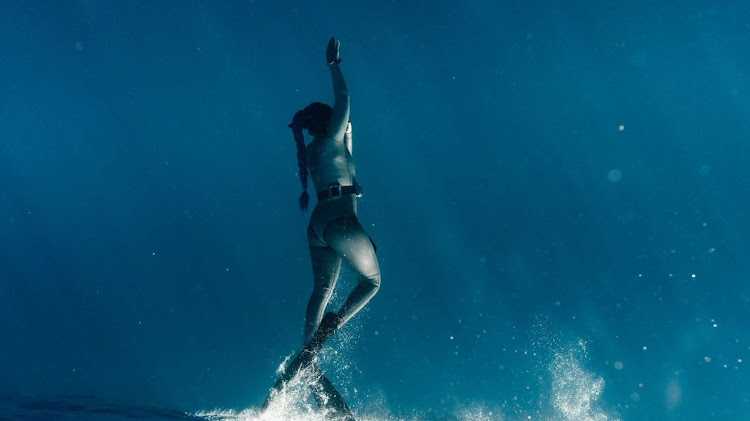 The S Mag inaugural Women of the Year issue honours the varied layers of female power and strength, which cannot be boxed or defined as one-dimensional. We have handpicked seven influential leaders in different industries as our Women of the Year honourees. They are Lamiez Holworthy (entertainment), Dr Tlaleng Mofokeng (health), Ntsiki Biyela (business), Tshiamo Modisane (fashion & beauty), Hloni Modise (media), Zandile Ndhlovu (sports) and Asanda Sigigaba (education). These women inspire, break new grounds, represent excellence and they make us proud all year round. We honour and celebrate them.

For 22-year-old Taonga Phiri, who took up a position on the Student Representative Council (SRC) at Rhodes University in 2021, she had to find a way ...
S Mag
2 months ago

The love for elegance and luxury is what fuelled businesswoman Bilala Mabuza's passion for interior design and décor.
S Mag
2 months ago

The face of the future

Asanda Luwaca is the first woman to sit at the head of the table at the National Youth Development Agency.
S Mag
1 month ago
Next Article