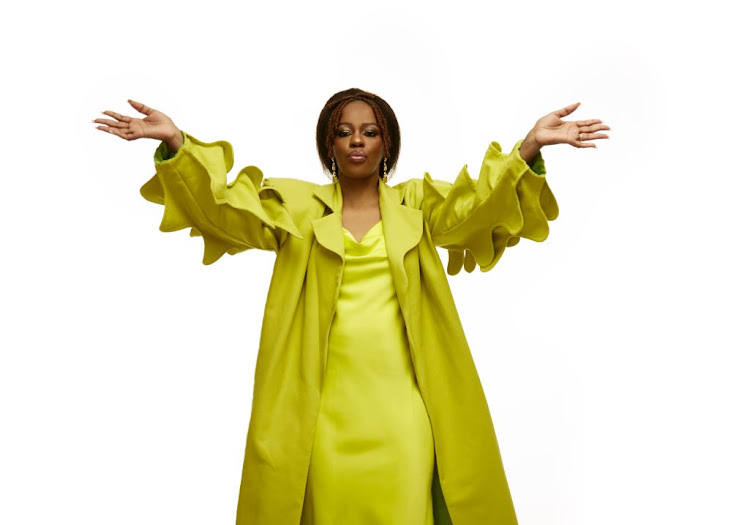 From moving musical boundaries, Hloni Modise is our women of the year in media.
Image: Steve Tanchel

When Hloni Modise, founder of HM Entertainment, dreamt of conquering the world of media as a young girl, with zero knowledge of how she’d do it, she could have no idea that one day she would launch Basadi in Music Awards.

Despite a few failed ventures, a feeling of being misplaced in the music industry, and having to hustle her way to the top while learning, Modise has finally carved a seat for herself at the table. The 37-year-old believes she is now only a few steps away from fulfilling her lifelong dream of creating space for young girls to succeed in the male-dominated music industry.

“I’ve always been big on celebrating people, because I like seeing others shine — that is how Basadi in Music Awards was born. To celebrate women in the music industry in different roles,” she says.

“Launching Basadi, as someone who has been in the industry for as long as I have been, was because of the many hardworking women in the industry who never get celebrated, and to become a vehicle that will create opportunities for women through collaboration. Even for those who are coming up.”

Yet, behind this major achievement is a petite-dynamite who struggles every day with self-doubt.

“When I was growing up, I always did things differently. While other children would be out on the streets playing, I would be in a classroom teaching, or I’d have other kids in the garage teaching dance classes or something,” Modise recalls.

“I always wanted to do something for someone else and was big on doing community work. Maybe that was my way of wanting validation because of the many times I’d been side-lined.”

She recalls the occasions when her name was not recognised for a community award despite the great deal of work she did in her home township of Alexandra.

“I was crushed as a little girl. I obviously was not doing the work for an award, but a little pat on the back wouldn’t have hurt, right?”

Learning early on that the world was not going to stop to clap for her, Modise became determined to work even harder to achieve everything she dreamt of.

One of these many dreams was being in the entertainment industry.

“I was inspired by mme Felicia Mabuza-Suttle, so much. I saw myself as her,” she says. “I was even part of [TV series] Scamto groundBREAKERS. I didn’t make the cut for the original six cast members, as planned. I was called a while later and told that, because of my story and the work I do within my community, they had restructured and made room for a seventh person as the anchor.”

Scamto groundBREAKERS also featured others who have since become well known, such as Idols SA presenter ProVerb, activist and poet Ntsiki Mazwai, and fashion designer Palesa Mokubung. The opportunity it presented at first validated her dreams, but she quickly realised she still had a long way to go.

After varsity Modise took small jobs in the industry, starting at an artist’s booking agency, where she only lasted three months.

Among her many other jobs were label managing singer KB Motsilanyane and trio Malaika, and working at Heita! Records for five years — a local division of then Sony BMG — before moving officially to Sony Music.

“I remember how good I was at my job, but, regardless of how great I was at that job, I knew I would never be the managing director because the industry wasn’t wired like that,” she says.

Yearning for more, she launched her own recording label — HM Entertainment — and signed her first artist DJ Tsiu, “which didn’t work out”. She also got to work with the likes of gospel singers Lebo Sekgobela and William Sejake, both of whom were nominated for the Metro FM Music Awards.

Feeling as though she had failed to build these artists to the max, she refocused HM Entertainment on public relations, working with the likes of gospel sensation Dr Tumi, veteran music power couple Caiphus Semenya and Letta Mbulu, and Idols SA winner Karabo Mogane.

“The first year was hard, and things went south. Everything that could go wrong did, and I took that failure very badly. That pushed me into a depression, because I felt as though I’d failed the young Black girls who come after me,” she says.

What kept her going was the dream of that young girl from Alexandra.

“I have a great support structure that believes in me wholeheartedly and that keeps me going. Friends, family, and a team that jump at all my ideas have kept me going. And just knowing that I don’t have any other option, because if I give up on myself, then what?

“I have just always had this feeling that my sole purpose in this world is to make a difference in other people’s lives. Celebrating my wins is a foreign concept to me — maybe that is why I don’t know how to feel about this particular award [Sowetan Woman of the Year],” she says, and laughs boisterously.

About Basadi in Music Awards, she says, “I knew we were onto something when at the luncheon I saw industry giants such as mama Mara Louw, Abigail Kubeka, and Mercy Pakela honouring the invite. Hearing someone like Antos Stella, Gallo’s former general manager, who has been in the industry for 38 years, saying that it was her first time in the industry being acknowledged in any way by the industry, aka us, it made sense. Hearing basadi say that a platform where they get validated has been long overdue, that they are enough for who they are. That, for me, makes me so happy.”

Editor's letter: The Power of Women

Inspiring women who make us proud all year long

For redefining the meaning of “It Girl”, Lamiez Holworthy is our Woman of the Year in entertainment.
S Mag
2 days ago
Next Article