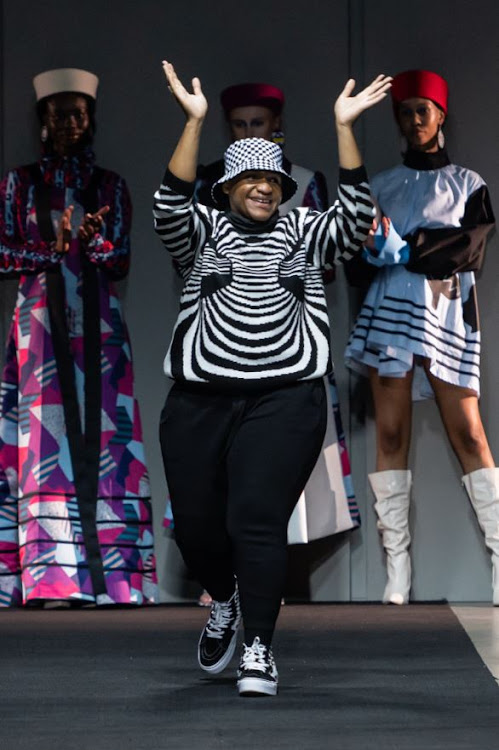 At a very young age, Mpumelelo Dhlamini’s passion for fashion was born in how he would play with the clothing of the toys he had and was enamoured with empowered women in spy movies.

Along with his mother, the strong woman of his brand, Ezokhetho was built on the backs of these inspiring forces. His label is one of the most exciting to watch and was recently named Emerging Talent of the Year by the Fashion Industry Awards SA.

“I didn’t want to use my name because I felt that was an obvious choice. That’s how fashion was and still is and it’s not wrong, but I just wanted something unique and something different. My mom and I came up with the name as I was completing my fourth year and I just stuck with it,” Dhlamini explains.

Family has been an integral part of his brand, with Dhlamini noting that a lot of the women in his family had to accomplish great goals. Dhlamini especially appreciated their sense of autonomy.

“They’ve always been people who are not afraid to be feminine and still be independent,” he says, sharing that his family has always shown up in the grassroots of his career.

Their infallible identities that existed outside of their family duties also reflect the fearless women he designs for, something that he has explored in his latest collection that was shown at SA Fashion Week (SAFW).

Exploring the same theme of “you strike a woman, you strike a rock” in his Imbokodo collection from last season, his new collection carries the same spirit to further expand on championing for feminine power.

“I wanted to add more of a South African element to it, I wanted to dive  deeper into what I’m trying to communicate as a brand,” says Dhlamini.

Rarely seeing collections continue in their themes, Dhlamini’s exploration of the theme aligns with the socio-political issues in the country that deal with femicide as well. Something seen in the continuation of the “NO” slogan dress that now reads “STILL NO…RESPECTFULLY” that stands out from his collection. 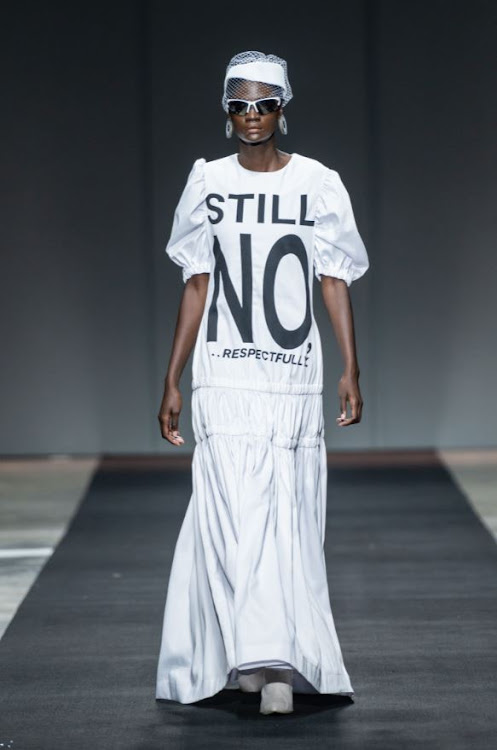 “It initially started from the outbreak of women being abused and killed, more especially black women. It’s taken from the ‘no means no’ phrase and we still haven’t forgotten – we haven’t put it on the side,” says Dhlamini, who has made it his brand's mission to fight issues around femicide and queerphobia.

This sense of freedom can be seen in the explosive use of colours that dominate the brand’s designs. Able to add a sparkling flare to earthy tones in the last season, the latest collection extended this with playful tones dominated by pinks and purples. All in the name of exploring striking colours that would best complement Dhlamini’s layering techniques. This especially highlighted Dhlamini’s Mbalenhle Print, a flower-like motif of a woman drinking from ukhamba (a Zulu calabash).

In the first volume of the Imbokodo collection, Dhlamini embraced religious motifs through crosses and church-going women’s berets, which have included cultural elements in the sequel that catches the roots of a contemporary woman outside of Heritage Day. 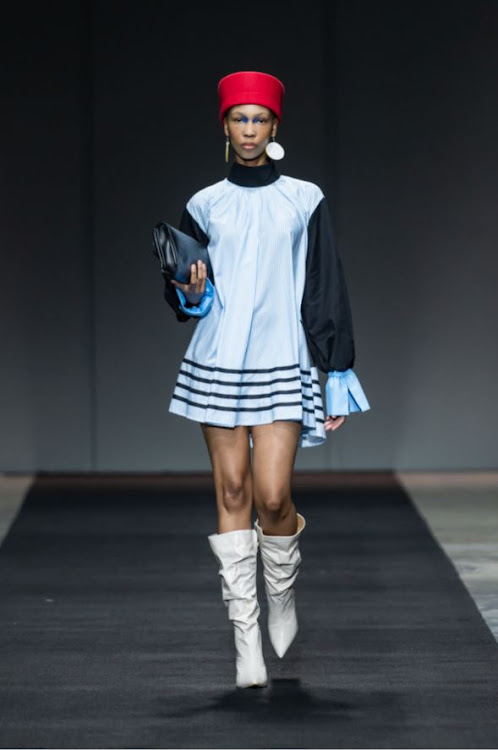 “I believe that we should be wearing it every day, it’s us celebrating our cultures and where we come from, especially after the Clicks saga where a customer went into the store wearing a traditional outfit and was reprimanded by the manager,” says Dhlamini.

“I also don’t blame the manager who was trying to uphold the corporate space that he is in and forgetting that this is who we are as a people,” Dhlamini adds, sharing that this further educates people about embracing cultural fashion.

Yet to get started on the next season’s collection, Dhlamini is keen on expanding the brand into menswear. “I’ve had the suggestion that we should also do menswear, but I’m still trying to see how it would work around that market,” he says.

This also includes Dhlamini’s plans to branch out of the Johannesburg market and dominate the Cape Town and Durban fashion scene along with plans to make his designs available to retailers. Dhlamini is also set to take over the TikTok space as part of expanding his cooking channel, Umpheko, already active on Instagram and Twitter.

SAFW took place this past week from April 28 to 30 at Mall of Africa in Midrand. The event included designs from veteran brands Mantsho, Naked Ape and the beloved Loxion Kulca. As part of the brand’s dedication to supporting local, SAFW holds seasonal competitions to give opportunities to up-and-coming designers.

One of these is the SAFW New Talent Search, which was won by Thando Ntuli of Munkus this year. Her collections also focus on the women in her family and extend this in its practical approach to layering, creating garments that allow buyers to make easier styling choices with a unique flair.

The theme of local is lekker carried itself through collaborations for apparel designers and footwear brands Franc Elis, Floyd Avenue and Ephymol with Eddels, Eox and Hopewell footwear respectively.

Thuso Mbedu dresses to the nines in B Mashilo Designs.
S Mag
3 weeks ago
Next Article