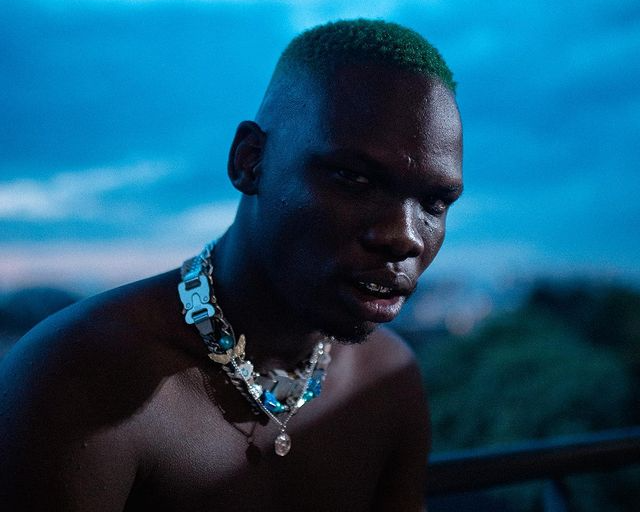 Musical artist Blxckie, 21, is about to set the global stage ablaze and rise the South African flag high in Europe.

The youngster from Durban, who first broke through during the pandemic, is set to tour Europe with well-known international hip hop duo Earthgang.

First calling himself “Blxckie Chan” in his primary school days, the Yex4 musician has now reached star status with artists such as legendary music producer Oskido and late renowned hip hop rapper Riky Rick giving him the nod for his musical ability.

While he grew up with a love for music, it was only at age 17 that Blxckie knew life on stage as a musician was what he always wanted to do. He has been given top honours at the annual MTV Base Hottest MCs, taking the coveted number one spot as the best in Mzansi.

Sowetan caught up with Blxckie to find out what makes him tick.

When did you start pursuing your music career?

When lockdown first hit in 2020, we as students weren’t allowed to go to campus, so I couldn’t attend school due to the restrictions. I then wondered what I could do in the meantime, so I turned my focus more to my music… This is where I realised that a career in music could actually work.

I ended up doing music full time, this is where I built a name for myself.

I started off by selling my songs and hustling for features with any artists that were willing to work with me. Because it was lockdown, we had to be creative in the ways we’d compose our music.

My initial passion for composing and storytelling stems from his love of poetry that I used to participate in  grade 8.

I then embarked on writing more of my own poems when I was in grades 10 and 11. In matric that’s when I started pursuing my music writing skills outside of school with people that do music in Durban.

Were you always a solo artist?

No, I was first a member of a group called the Internet Boys from Durban. While I was navigating the balance between high school and my love for music. I used my time as a part of the 11-member group to hone my craft and ingest as much knowledge about composing music.

While we were under lockdown, the newfound fame interrupted my plans to complete my bachelor's in social science and a major in psychology and anthropology, however, I intend to go back to varsity and complete the last semester that will allow me to graduate and attain a qualification.

How did you feel when you made your first big break?

My breakthrough into the music game wasn’t as easy as I thought it would be. There was a time I was making music and no one really knew me. I was actually making music for myself. When I became a part of Internet Boys, people would start recognising me as the artist that’s killing it in the whole group. That recognition was enough for me to fuel my drive to get into the game much more.

After doing a collaboration with Lukas Raps, that’s when things started to peak for me. He kind of discovered me and motivated me to move to Johannesburg. He actually made me see that I could acquire all the things I wanted by just moving here.

Cassper Nyovest’s DJ, Dr Peppa, was also instrumental in getting my name known and putting me in the right spaces.

How would you describe your journey thus far in the industry?

It's non-existent fame to me, this is due to how I avoid being seen in public. I am aware of everything, as in the love and support but because I am always in the house working in the studio I don’t get to mingle as much with people.

Yes, I am appreciative for the love but having turned into a star during the lockdown, I’m used to being indoors than I am outdoors.

How is life like now that you're a star?

Whenever I step outside to buy something at the store, people do recognise me, some even stop and ask for pictures but I’m cool with it. I guess it comes with the nature of being an artist.

What are your future hopes and plans?

I can't wait for for my international tour with Earthgang later this year. With this move, I hope to grab the attention of my muse, American rapper Young Thug. I also hope to one day fulfill my wish to collaborate with soulful singer Lira.

It’s super dope to see my music can transcend our shores to reach places like Europe and America. Seeing people from those countries vibing to my music and streaming it the most more than people from African countries is mind-blowing to me.

Being able to tour with such a renowned hip hop group in a foreign country is validation enough that I’m on the right track in terms of my music.

The new host promises to bring her own pizzazz to 'Culture Squad'.
S Mag
4 months ago

Let's fall in love with Focalistic and DBN Gogo in Paris