'Suspension is a lie, I'm on leave' 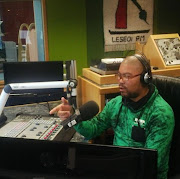 According to three independent sources known to Sowetan, who asked to remain anonymous, Nkunyana has been taken off schedule for January as a result of missing the anticipated show and leaving listeners disappointed.

Gugu Ntuli, group executive: corporate affairs and marketing at SABC, confirmed to Sowetan yesterday that Nkunyana has been unscheduled by the station and declined to comment further.

"The SABC can confirm that Mr Nkunyana Nkunyana has been unscheduled. As this is an internal matter between the SABC and Nkunyana, the SABC has no further comment," Ntuli said.

Nkunyana, who hosts the popular show Ke Ya Le Wena on weekends between 12pm and 3pm, denied that he was placed under suspension and said he was on leave.

“I don’t know anything about suspension and it is not true that I did not go to work on December 31. The suspension is a lie. I am currently on leave, going back next week. I was on duty on the first of January,” Nkunyana said.

Sowetan understands that the station had heavily promoted their New Year's Eve show between 9pm and midnight featuring Nkunyana as the host, but Thabo Mokone had to do the show at the eleventh hour.

Mokone hosted the 6pm to 9pm timeslot and it was scheduled that he will hand over to Nkunyana. But when Nkunyana allegedly failed to show up, Mokone ended up being on air for a record six hours.

Nkunyana showed up on air on January 1 and did the mid-morning show (9am to 12pm), that was scheduled to be done by Mokone. That was the last time Nkunyana was on air.

"Skuzabell is on suspension for the whole month. Apparently he says he was involved in a car accident that day as he was rushing to the show, hence he missed the show," said a source, who works at the station.

Another source added: “Failing to show up did not impress listeners to a point that station manager [business manager] Mamontha Motaung went on air a few days later to apologise to listeners and promised it will never happen again, although she didn’t go into details over what transpired."

An avid listener of Lesedi FM informed Sowetan that Mokone revealed in a later broadcast that his kids didn't get the firecrackers he promised to buy them to ring in the new year because they were in the boot of his car as he was stuck on-air.