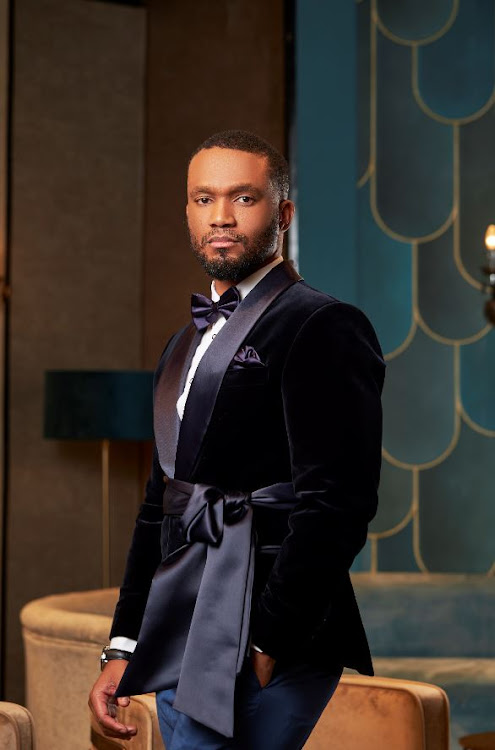 Yonda Thomas has in recent years proven to be a force to be reckoned with in the film and television industry.

The heartthrob actor is best known for his Netflix roles on How To Ruin Christmas, Seriously Single, Mrs Right Guy and Happiness Ever After.

Born in the small town of Mthatha in Eastern Cape, Thomas remembers being a curious child who always wondered how the world works.

“I was raised by my mother. I grew up as a child who wanted to discover the world. I was quite adventurous but I remember being fascinated by acting and inquisitive on how actors manage to pull off such convincing storylines,” Thomas says.

“As intuitive as I was about the arts, I later realised I couldn’t pursue acting because I had no formal training, even though I tried out a few drama classes back in primary school.”

While he had a burning desire to become an actor, the 36-year-old chose a safer option by obtaining a degree in public administration. After graduating, Thomas moved to Gauteng in 2008 to become a diplomat.

“During this period I wasn’t aware that my life was about to change. This one time my brother asked me to accompany him to an audition. I was reluctant at first but I ended up going with him,” Thomas recalls.

“When we got there, we found a very long queue. As we were waiting in line, my brother asked me to help him rehearse the monologue given to him, and so I did. When we got closer to the audition room, I told him that seeing that I knew the monologue, I was also going to give it a try.

Actor says she’s been a creative her whole life.
S Mag
1 week ago

“When I got in there, I was nervous but something in me felt content, as if I belonged there. I then narrated my monologue and got shortlisted. I was very excited that I got such great feedback. However, when I later met up with my brother outside the audition room, I learnt that he didn’t make it… the ride back home, I must say, was very uncomfortable.”

While he got a thumbs-up to participate in SABC1’s acting competition Class Act in 2010  (which was later won by Sdumo Mtshali), Thomas did not realise the pressures that would come with acting.

“I went on to advance to the top five of the competition and even though I didn’t win, the affirmations regarding my acting validated my gut feeling to pursue my dream even further. After the competition, I was offered representation by Moonyeenn Lee at her MLA agency. She helped to coach me on how to channel all these tough and ever so subtle roles.”

Favourite food: Ostrich steak with a side of parmesan risotto

With the numerous acting classes he attended, the actor got his big break in 2011 when he landed his first starring role on the small screen, headlining SABC1’s drama series Fallen. He has also starred on The River, Isidingo and The Jakes Are Missing.

“For someone like me who started in the industry with zero experience and no acting background, I am grateful for where I am today. In all the roles I’ve done, I gave them my all,” Thomas says as he reflects on his teething moments in the industry.

“The roles I enjoy playing the most are the bad boy roles and the antagonist. It isn’t easy channelling those roles, so it gives me such pride when I get to convincingly execute them.”

Being a familiar face on romantic series, Thomas now portrays the role of Lelethu Malinga on local soapie Generations: The Legacy. “Lelethu is a charming yet daring younger brother to detective Dali Malinga, played by Andile Nebulane. My character is an investigative journalist who joins the cartels and the underworld to expose them.

“Introduced as a mystery patient, he was placed under the care of Dr Sphe Moroka before discharging himself. One thing I can tell you is that this character brings forth a lot of trouble but will be so entertaining to watch.”

As he continues to dominate the acting industry, one of his future plans is to own a production company and an academy that will help aspiring actors pursue their dreams. “I want to give back the same thing that was given to me, an opportunity at acting.”

The veteran broadcaster believes her online yoga classes can help people who are suffering with depression.
S Mag
1 week ago
Next Article