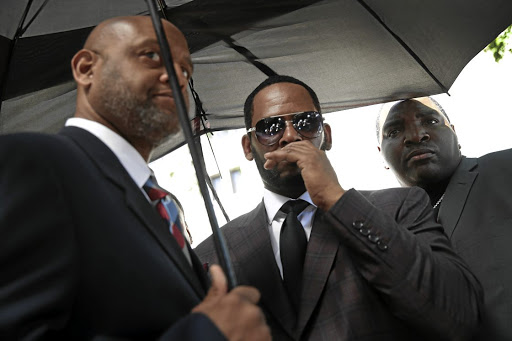 R. Kelly is a "predator" who demanded absolute fealty from the many women and underage girls he recruited for sex in a two-decade racketeering scheme, a federal prosecutor said on Wednesday as the R&B star's sex abuse trial began.

The indictment describes Kelly alleged dealings with six women and girls, including the late singer Aaliyah, who was 15 when she married Kelly.

"This case is about a predator," Melendez said in her opening statement. "This case is not about a celebrity who likes to party a lot."

But Kelly's lawyer Nicole Blank Becker said the government's case had "gaps," and that Kelly's accusers, including several whose names are not public, were former fans who turned on him because they were unhappy their relationships didn't work out.

"They knew exactly what they were getting into," Becker said. "The relationships Mr Kelly had with the various Jane Does were consenting relationships."

Kelly, a three-time Grammy winner whose songs include "I Believe I Can Fly" and "Bump N' Grind", has pleaded not guilty to a nine-count indictment that includes accusations of bribery and extortion. He has strongly denied wrongdoing.

Prosecutors will argue that Kelly, whose full name is Robert Sylvester Kelly, used an entourage of managers, bodyguards and others to recruit victims, sometimes at concerts.

Melendez said Kelly would require victims to get his permission before doing virtually anything, including going to the bathroom and blackmail them by threatening to release self-incriminating letters he forced them to write if they fled.

Some female accusers and at least one male accuser are expected to testify for the government.

The trial was delayed several times by the coronavirus pandemic and is expected to last about one month.

It is the culmination of years of suspicions and accusations against Kelly, many discussed in the 2019 Lifetime documentary "Surviving R. Kelly," and nearly four years after the start of the #MeToo era.

Kelly has been jailed for more than two years and could face decades in prison if convicted.

Even if he is acquitted, he still faces sex-related charges in Illinois and Minnesota, where he has also pleaded not guilty.

Melendez said one accuser, Sonya, was sexually abused nearly two decades ago at Kelly's studio in Chicago, where the 22-year-old hoped to interview him for a radio station where she worked.

The prosecutor said Sonya was locked in a room at the studio for three days and lost consciousness soon after being let out and fed.

Upon awakening, Sonya felt the wetness between her legs, saw Kelly fastening his pants, and realized she had been sexually assaulted, Melendez said.

The six alleged victims in the indictment, four of whom were underage, are identified as Jane Does No. 1 through No. 6.

Prosecutors will try to show that Kelly bribed an Illinois official in 1994 to obtain fake identification for Aaliyah, who is Jane Doe No. 1 and whose marriage license showed her age as 18, so that they could marry.

According to prosecutors, Kelly believed he had impregnated Aaliyah, and hoped marriage would keep her from having to testify against him. Aaliyah died in a 2001 plane crash.

Eight counts in the indictment allege violations of the federal Mann Act, which makes it a crime to transport people across state lines for prostitution.

Rock and roll pioneer Chuck Berry is among other well-known people convicted under that law. The actor and filmmaker Charlie Chaplin was acquitted of the charge.

Kelly was acquitted of child pornography charges at a 2008 trial in Illinois.

He last released a studio album in 2016. Kelly's career stalled following the Lifetime documentary and the latest charges.

It is also alleged that the singer bribed an Illinois official in 1994 to obtain false identification for singer Aaliyah, who was then 15 years old, ...
S Mag
1 month ago

The storm’s not over … it seems R. Kelly might finally have to face the music
S Mag
2 years ago