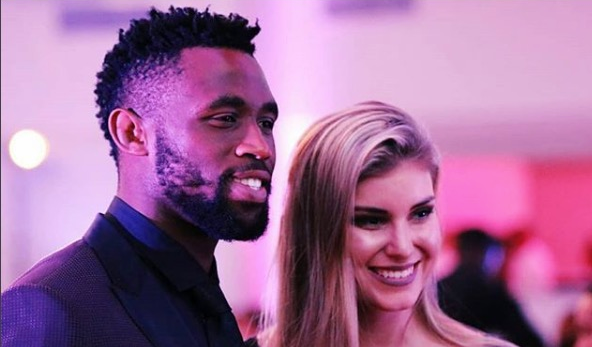 Rachel and Siya Kolisi have been married for five years.
Image: Supplied.

In celebration of their fifth wedding anniversary, Springbok captain Siya Kolisi and his wife Rachel shared a timeline of their special moments together.

Over the weekend, the couple gave fans a glimpse of their love life over the past five years through a picture monologue.

Taking to Instagram, Rachel shared a collage of pictures from their wedding day with a touching love note caption.

“Five years later, to the day. And I still look at him that way,” she wrote.

“Thank you for being a home. I love you.”

Siya shared an Instagram Reel of throwback pictures to celebrate their anniversary.

The reel included pictures from as far back as when they first met, a snap of the two at Siya’s Umgidi (a Xhosa cultural event to welcome a boy returning as a man from the sacred custom of initiation), and family trips.

“Memories. Happy five years, Mariri. Thank you for all the memories! Love you,” wrote Siya.

The couple has in the past opened up about treating each other as equals in their marriage.

In an interview with Clicks, the couple spoke about overcoming hurdles in their relationship and coming out stronger on the other side.

“I grew up in a home where men go out to get the money and women stay home to cook and clean. I’ve had to realise my wife and I are equals,” Siya explained how he had to learn to support his wife.

“At the beginning, I said Rachel would take the children and I’d come home from training and put my feet up in front of the TV, but I had to remember I’m still a father and husband and my children and partner need my attention when I’m home.”

With Siya’s move to Durban to play for the Sharks, Rachel predicted in June that the next six months were going to be “hectic”.

“Had the best nine days with a Cape Town visit from Siyamthanda. I think if there's one thing I’ve really taken from the past year-and-a-half it’s to be intentional about being fully present in moments with loved ones. We have a pretty hectic six months ahead but a lot of good days to look forward to,” she said.

The American singer and her man A$AP Rocky have been longtime friends before they started dating.
S Mag
10 months ago

In celebration of their wedding anniversary, we go down memory lane with pictures of the couple.
S Mag
11 months ago

TV personality Minnie Dlamini-Jones and husband Quinton met up with Springbok captain Siya Kolisi and his wife Rachel for an epic weekend away.
S Mag
11 months ago

It might be cold outside, but celebville sure is heating up!
S Mag
9 months ago
Next Article