Going against the grain and fulfilling one's true purpose is something Zandile Ndhlovu knows far too well. As the first black freediving instructor in South Africa, Ndhlovu's journey has been documented on a new dynamic YouTube series titled Free Range Humans.

Ndhlovu is part of eight extraordinary people from across the world who are being profiled on the original digital content series from Corona Studios.

Believing that she's one with the ocean despite the colour of her skin, Ndhlovu​'s passion has seen her break through cultural barriers.

"The first time I looked beneath the surface of the water something changed inside of me-- I just remember feeling home in a way I’ve never felt before,"she says.

"I’ve always been awkward, I’ve always never fit in and for the first time in my life there was one place where I fit, I didn’t need to explain anything. I could just be there,” Ndhlovu tells of the day she decided to embark on her freediving journey.

Ndhlovu first learnt that she was going to be a part of the YouTube series last year to which she was initially "surprised" that she’d be able to "live and share her truth with many people across the world".

“I am so incredibly… I think the word is ‘overwhelmed’. I feel so honoured especially being a black woman that’s representing an ocean space, something that seemingly not normality where I come from. So, being chosen to be a part of the series helps me to represent us in such a big space especially with such a big brand,” says Ndhlovu.

“With my truth being represented, black people can see someone that looks like them in the water and they can be confident as well!”

Touching on black people not being represented in the ocean space, Ndhlovu explains that the possible reason why there are so few black freediving instructors could be due to the lack of representation in the ocean.

“I definitely think it stems from something you don’t know. I think we have work to do in unearthing and revisiting some of the fears that live in our bodies when it comes to water. I think it’s a journey and it’s recognising that we don’t know what we don’t know and once we move away from the fears that are there, we will get to find a new space, a new existence which is so incredibly freeing." 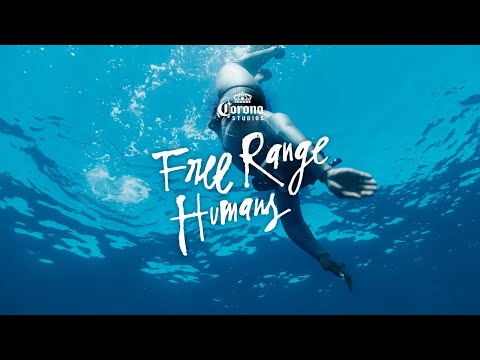 Often referencing the ocean as “her” Ndhlovu explains how she felt "whole" when she was beneath the water which made her yearn for more.

“I knew my voice and my spirit could connect at such a deep level with the ocean and I knew that was a change agent where I said, ‘I will pursue this life and make it my life!’”.

You can view all eight episodes of Free Range Humans from Corona Studios on Corona’s YouTube channel YouTube.com/Corona.