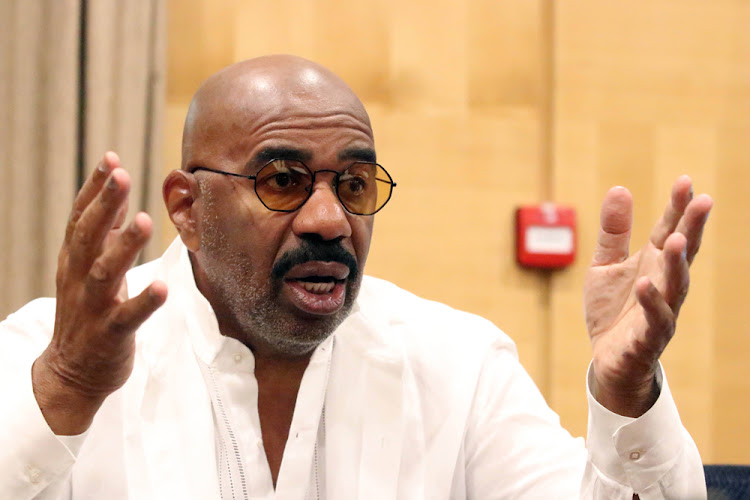 American comedian and TV host Steve Harvey is back to host the second season of the iconic game show, Family Feud South Africa.

Having been an instant success in SA, the fun-filled family show is set to air its second season next month.

“Having had the show here in SA, I’ve learnt a lot about the names, the pronunciation and how the syllables work a little bit better. I’ve had a lot more success with the names of where they from because I honestly try to get it right out of respect but you know at the same time, it’s fun to [hear me attempt to say the names]… people enjoy watching me try saying these names while falling on my face all the time.

“But this season we had a lot of celebrity guests here from SA, even though they might not be internationally famous but they are famous here in SA– which was pretty cool! All the contestants were really nice, the families were really enthusiastic and I think we just had another fantastic season!”

Based on his previous season where he got to know the South African audience a little bit more, when asked to describe South Africans in three words, Harvey replied:  “Just like me”.

“The way we dance, we got them from Africa. If it wasn’t for you, there is no us, that’s what the connection is. That’s what so many people miss, but I get it and that’s why I wanna be here so bad because I understand the connection.”

When asked what he loved about SA, the esteemed TV host exclaimed that not being a part of the minority but the majority when he’s in SA was what made him feel elated to be in a country filled with people who looked just like him.

“The thing I love most about South Africa is that it gives me the pleasure of waking up every day and not having to be a minority. I am 64-years-old and I’m not a minority anymore. I’m in the majority over here, I’m winning!

“It’s an amazing feeling. See, y’all are so used to it… it’s like you wake up, this is like a Detroit to me, it’s very refreshing. Like, it’s really nothing about racism it’s just about the feeling of not having to factor in every morning every day when I wake up that I’m black! But back in the States, I have to factor that in that I am black.”

Family Feud SA will air on e.TV from May 9.

Popcorn salad with dressing? Apparently it really is a thing

"The one we all saw was guilty is now 'officially' found guilty! More to justice!"
S Mag
1 year ago

Despite leading what was a troubled life, rapper Earl "DMX" Simmons still inspired many.
S Mag
1 year ago