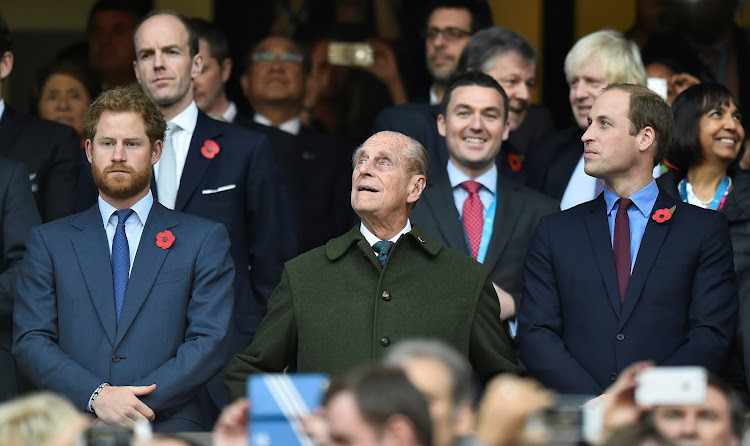 Prince Harry and Prince William, pictured here with their grandfather Prince Philip, will not walk shoulder to shoulder at the duke's funeral tomorrow.
Image: Toby Melville/Reuters

Princes William and Harry will not walk next to each other at their grandfather's funeral on Saturday, Buckingham palace has confirmed.

The palace revealed the full details of Saturday's event — including who will attend the order of procession.

Prince Philip died last week Friday at Windsor Castle with the queen reportedly by his side. He was 99.

A statement released on Thursday revealed the running order of the funeral, full programme and the list of the 30 people attending. The occasion has been scaled down due to Covid-19.

Among the details was that the duke's funeral, like the Queen Mother's, would be a “ceremonial royal funeral” rather than a “state funeral”, which is generally reserved for royals.

Additionally, Philip's four children — Prince Charles, Princess Anne, Prince Andrew and Prince Edward — will walk behind the coffin on foot, followed by Prince William and Prince Harry who will be separated by their cousin Peter Philips.

Upon arrival at St George's Chapel, William will move ahead of the Duke of Sussex as they take their seats separately, according to the Daily Mail.

Bringing up the rear will be Princess Anne's husband Tim Laurence and the Earl of Snowdon.

This is in line with the queen's wishes, it was further reported.

Other members attending the funeral are:

Prince Harry's wife, Meghan, won't be present as she has been advised against travelling due to her pregnancy. She's expecting the couple's second child, a daughter.

The Dean of Windsor will conduct the service while the Archbishop of Canterbury will pronounce the blessing.

The latest developments come amid a rift between the once-close brothers, which was confirmed by Harry last month in an explosive interview with Oprah Winfrey. The duke revealed that while he loves his brother to “bits”, they were currently giving each other space.

Prince Philip's funeral service will start at 3pm and will be broadcast live on TV and radio.