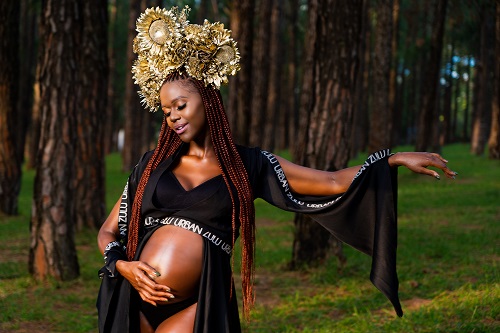 'The Queen' actress Sibusisiwe Jili says pregnancy has been a spiritually enlightening experience for her.
Image: Ray Manzana

After finally being able to carry a full-term baby she calls her "little miracle", actress Sibusisiwe Jili can't stop expressing her gratitude for being able to bring such a gift into the world.

The Queen actress announced her pregnancy earlier this year and has been vocal on social media about the hardships she has faced when it came to conceiving.

Jili previously revealed that when she was 17 years old, she had lost her first child and was told by doctors she'd never be able to carry and birth a child again, however, ten years later she was blessed with a boy. She then gave birth to a healthy but premature firstborn child, Onke, who turned five earlier this year.

With carrying a child to full-term being her first-ever experience, a proud Jili shared on social media that her 'miracle' baby had arrived.

The actress referred to her miracle as a "lion cub" and gushed about how chubby the baby looks.

Jili, who plays the role of Georgina on Mzansi Magic's hit telenovela, also spoke about how everyone in the house takes turns holding the adorable little bundle of joy, and how her child's presence was like "cooling showers of rain".

"Who voted for the nine months vele, never again. I’m gonna be the dad next time," Sibu said with laughing emojis.
Pic of The Day
7 months ago

Fezokuhle Zulu is one excited mommy-to-be!
S Mag
8 months ago

The Queen actor Sibusisiwe Jili is defying the odds with her second miracle pregnancy.
Entertainment
8 months ago

Although the country has been under lockdown due to the Covid-19 pandemic, the stress and fear surrounding it has not stopped good things from ...
Entertainment
1 year ago