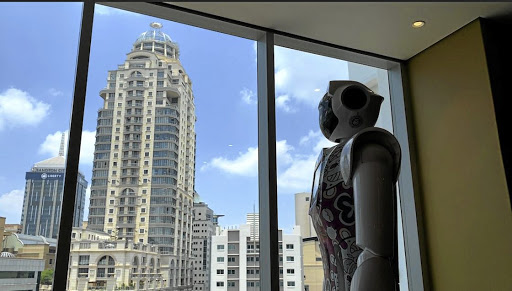 Micah, Lexi and Ariel are robots designed to help with tasks at Hotel Sky in Sandton, Johannesburg.
Image: Reinart Toerien

"Good cop, bad cop." That's the strategy we settled on for testing the skills of the vaunted AI-powered robots at the new Hotel Sky in Sandton.

Named Micah, Lexi and Ariel, these bots are just some of the tech-savvy highlights the hotel, opened in November, boasts. On its website you will also read about the app, through which guests can book, check in, and even open their rooms and order room service.

In theory, it sounds like a Covid-friendly dream destination. In reality, things did not go off without a hitch. 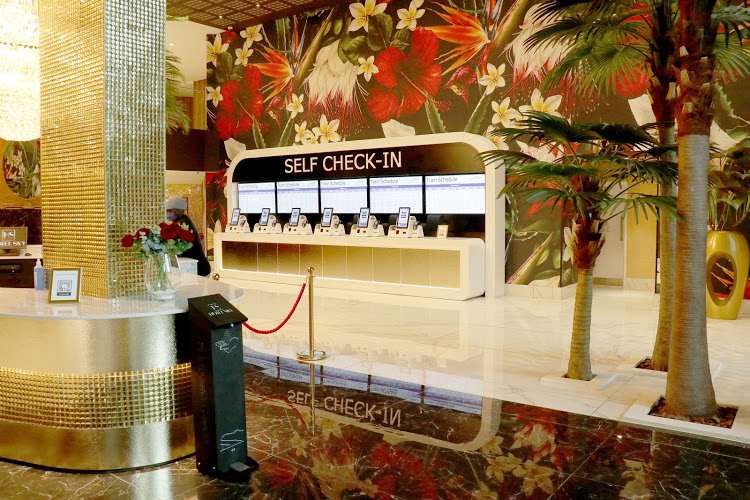 The self check-in desk in the reception area of Hotel Sky in Sandton, Joburg.
Image: Sanet Oberholzer

The self-check-in on the screens in reception worked like a charm — until I was told my room was not ready. Not a train smash. I decided to register on the app while I waited, but my account wouldn't activate and I had to be issued with an old-fashioned plastic room key. Bummer.

In an ideal world, this would have given us time to test our robot-interrogation skills but Lexi, the robot assigned to the lobby, was on the charger.

Luckily, alcohol is an acceptable remedy and the Turkish delight cocktails, served on the restaurant terrace, were a hit. (No drinks menus are available yet but these pretty drinks can be whipped up as long as you know what to ask for.)

Plans of a pampering at the spa followed by a drink in the Galileo piano lounge before dinner in Eclipse restaurant were scuppered when a human advised that these venues were still closed due to Covid-19.

For now, all meals are served in the breakfast restaurant, Equinox. That meant the self-playing piano in the Galileo lounge and the promised views over Sandton from Eclipse were also off the menu. 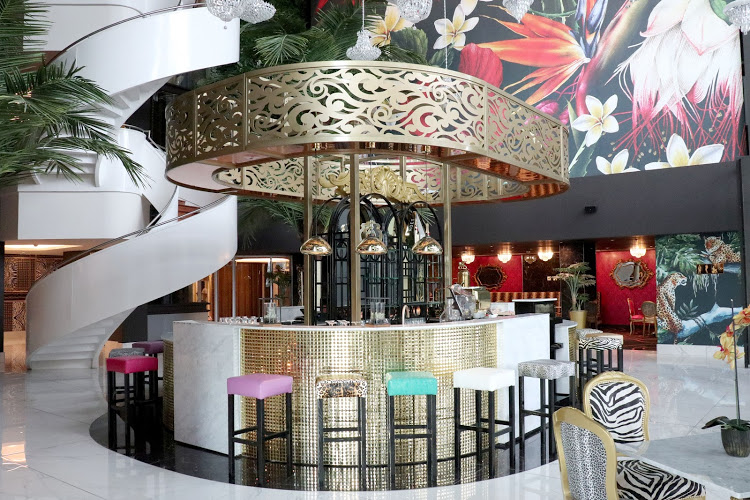 When the robots aren't charging you'll randomly hear them say "Welcome to Hotel Sky. You can ask me anything." And did I try. I was advised that the gym is free for guests to use — the one venue I was not intent on exploring.

I took no offence that Ariel largely ignored my other questions or responded with a Google search result for "Islamabad" when I asked her a philosophical question about matters of the heart.

The next morning after breakfast, two fellow travellers decided to try their luck. Ariel's screen didn't display the usual list of suggested questions to ask but the guests weren't deterred. They tried touching the screen, at which point Ariel started shouting: "Error! Error!"

More pushing of buttons ensued, which prompted the robot to ask if we would like to be taken to the elevator. "Follow me," it said, more calmly. "Exciting stuff!" I thought, but this elicited a rather quick response from a member of staff, who subdued the confused bot before I could fall into step. I would've liked to test out its skills at navigating around the hotel.

Room service, which the bots are also supposedly able to deliver, is not yet available either. My remote-control app couldn't connect to the TV in our suite, limiting our viewing choices to SABC, M-Net and news. I was advised that iOS apps generally work better. I have an Android. Under the list of things to do around town on the hotel's TV channel, Big Ben and the Tower of London popped up as suggestions and the meal prices were listed in pounds. 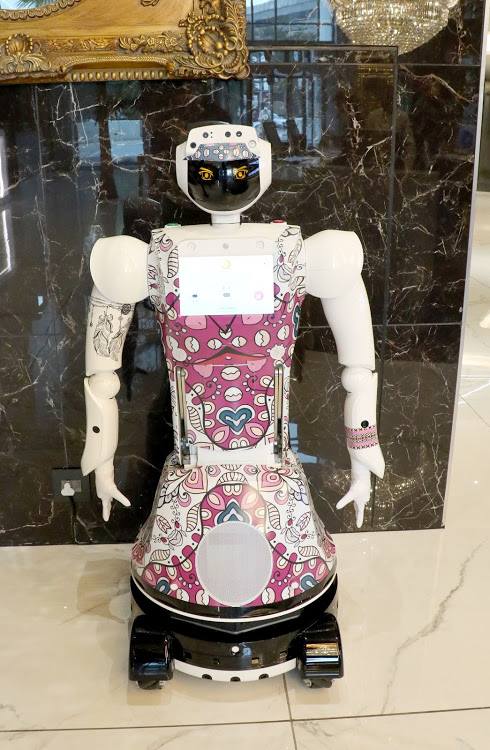 Lexi, one of a trio of AI-powered robots at Hotel Sky.
Image: Sanet Oberholzer

The rooms don't have coffee stations and you'd best pack a robe (none are provided) if you want to grab a cuppa at the tea-and-coffee bar in the corridor during pyjama hours. I rather liked the risky game of "Will I be seen or won't I?"

I loved that they have shampoo and body bars in the rooms, an eco-friendly option that is unfortunately overshadowed by the availability of only disposable coffee cups.

And for all the good-hearted attempts at limiting person-to-person contact, I was surprised by the self-service breakfast buffet sans individually packaged portions, given the threat of Covid-19 germs.

As for the tech glitches, I didn't give up. A last attempt to activate my room key paid off at exactly 9.59am. Fantastic, I thought, as the word "success" flashed across my screen andI made my way out the door for my 10am checkout.

Opening special from R625 per room per night. For R795, you get bed and breakfast (single or double occupancy). They're also running specials over the Easter weekend. See hotelsky.co.za for more information.

• Oberholzer was a guest of Hotel Sky.

This article first appeared in the Sunday Times Lifestyle.

Nestled in Johannesburg’s city centre, there is a hidden gem in the luxurious yet casual five-star haven, The Houghton Hotel. Exquisitely ...
Good Life
1 year ago

These travel hacks will help you organise a lower-risk holiday.
S Mag
1 year ago

Now that we can travel again, it’s time to take to the road for a journey with a difference — to sniff out good food.
S Mag
1 year ago

The Pepperclub Hotel is the perfect launchpad from which to explore the Mother City.
S Mag
2 years ago
Next Article