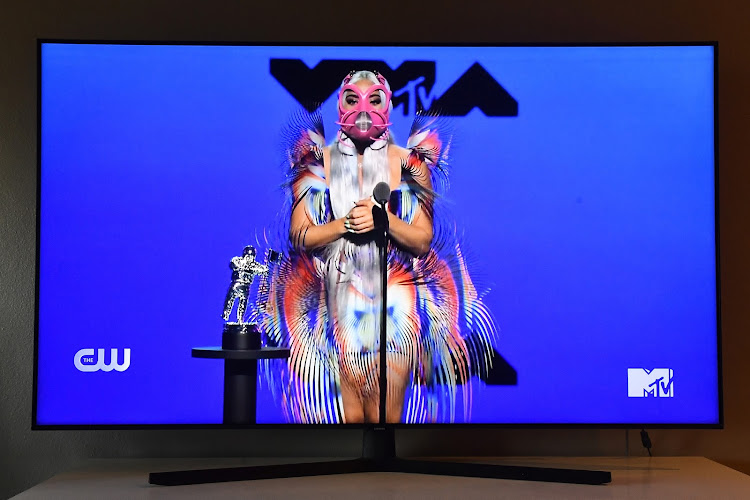 In this photo illustration, Lady Gaga accepts one of the five awards she won during the 2020 MTV Video Music Awards, which was broadcast on Monday.
Image: Frazer Harrison/Getty Images

“I was wearing face shields before it was a thing,” a jovial Lady Gaga tweeted on Monday, after she took home five trophies at the MTV Video Music Awards (VMAs).

It's no surprise then that this superstar's PPE game was next level during the ceremony, which was filmed without a live audience due to the coronavirus pandemic.

The Rain On Me singer made various outfit changes during the event and donned a total of six different face coverings. As the New York Times put it, “Her clothes were eye-catching, but her masks were unforgettable.”

To kick off the evening, Lady Gaga took her cue from MTV VMAs “Moon Person” trophy, with flowing silver locks to match her Arena coat and a face shield by Conrad by Conrad that looked like — dare we say a fish bowl? — an astronaut's helmet. Either way, the outfit gave us Jetson's vibes — in a good way.

I was wearing face shields before it was a thing 👆🤣 #VMAs pic.twitter.com/Udq8ixlx75

Lady Gaga was at her outrageous best in a rainbow Iris van Herpen outfit with gravity-defying fringing and a Barbie pink Cecilio Castrillo Mask. We just wished she'd sleeked her hair back into a ponytail to show off that dress to its full effect.

With its clean lines and exaggerated full skirt, this Christopher John Rogers dress is representative of the sleeker, more sophisticated side of Lady Gaga's fashion persona, which she was showing off on Hollywood red carpets before the pandemic.

Featuring what many are calling tusks — but look like octopus tentacles to us — her “rustic” Lance Victor Moore mask was bit of an incongruous choice given the glam nature of the gown, but it's still a work of art in its own right.

Is it just us or could Lady Gaga be mistaken for a member of the Kardashian-Jenner clan in this metallic MaisonMet mesh mask and sparkly Valentino Haute Couture catsuit combo? She wore the outfit twice on stage, switching up the styling to give it a fresh look.

Facial expressions add a lot to impact of a live performance, so having to cover up for Corona's sake presents a quandary for singers. To get around this challenge, Lady Gaga wore a hi-tech Smooth Technology x Diego Montoya mask when she took to the stage to perform a medley of her hits.

The futuristic mask featured colour-changing lights, which reacted to the sound of the celeb's voice allowing her to express a range of different “digital” facial expressions.

There's not much to say about Lady Gaga's last look of the evening — a simple MTV tee and platform boots — but that's OK because her mask creates enough of a talking point on its own.

This punk-like creation featuring spikes, chains and more further hammered home the message the singer shared with the world on the night: “I might sound like a broken record, but wear a mask. It’s a sign of respect.”

This nyc girl is so overwhelmed with all of the love. Thank you for always sticking with me. I love you so much 💓 #vmas