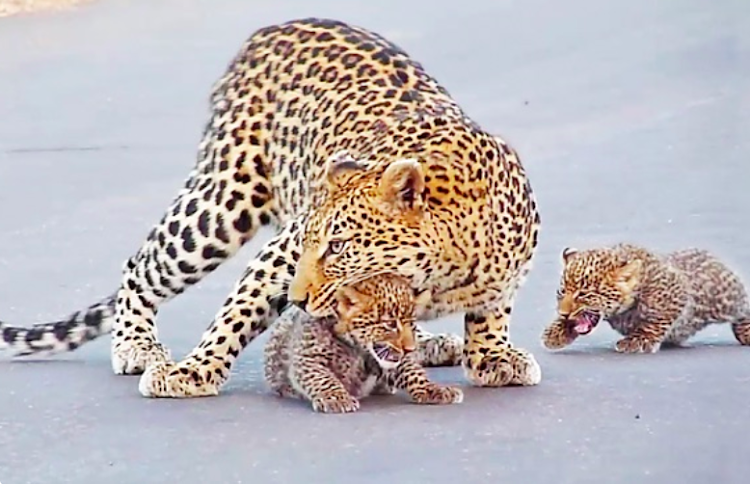 Mother leopard teaching her cubs how to cross the road in the Kruger National Park.
Image: Latest Sightings Kruger

Well, here's some good news for your Wednesday.

Latest Sightings Kruger has shared a cute video of a mother leopard teaching her cubs how to cross the road.

The video was taken by 64-year-old, Thinus Delport who, before the lockdown, had the opportunity to witness a rare sighting of a mother leopard and her two tiny cubs crossing the Lower Sabie road to Crocodile Bridge in the Kruger National Park, Mpumalanga.

Delport said at first, they were convinced that there were no leopards in Kruger.

“Early morning, my daughters and I left the camp looking for leopards. They were convinced that there are no leopards in the Kruger, as neither of them had ever seen one. As we drove, I jokingly convinced them to start singing in the car, to draw the leopards out. So they did - and to my surprise it worked.

“We hit a traffic jam where a few cars were stationary. It seemed like visitors were looking at a pride of lions. Then my daughter noticed that in the thicket behind our vehicle, there was a mother leopard trying to move her cubs,” Delport said.