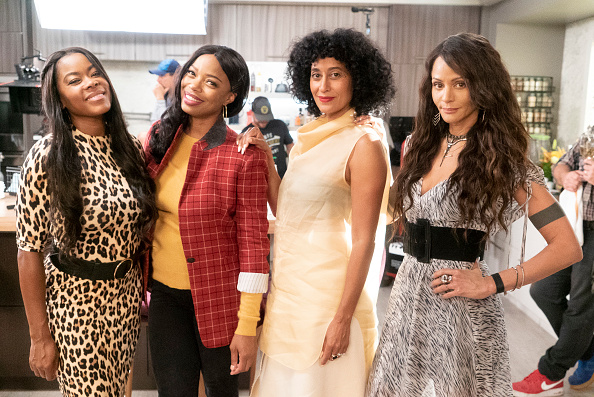 There’s no denying that Girlfriends was one of the greatest sitcoms to come out of the 2000s. With a strong cast of black women, navigating different aspects of their lives, Girlfriends served as inspiration for many and mirrored certain realities in a comical way. For those who’ve been asking for a reunion of the stars of the hit show, it’s finally here....sort of!

Persia White, Jill Marie Jones and Golden Brooks joined their girlfriend Tracee Ellis Ross (who plays Bow) on an episode of ABC’s Black-ish which aired last night in the Iited States. In an interview with ABC, Ross said the episode is about feminism and the "interesting divide that happens between the white community and the black community around feminism".

In the episode, White, Jones and Brooks play members of Bow’s feminism group, whom she introduces to her daughter Diane (played by Marsai Martin) and mother-in-law (Jenifer Lewis) after they say they don’t believe in feminism.

Judging from their social media posts and interviews, the cast was delighted to be on the small screen again after 11 years since the eighth and final season of the sitcom aired. In an Instagram post, Jones wrote:

“It’s so hard to believe that it’s been 12 years since we’ve all played together on television. Bonkers!!! SO MUCH FUN!”

In an interview with Essence, White said the girlfriends' chemistry was still as real as it was all those years ago. “It was really mind opening to see that the chemistry stood the test of time, because of been on many shows since Girlfriends ended, and shows before we had that show and that kind of chemistry doesn’t just happen. It doesn’t. You can’t fake it.”

Fans were equally delighted a with the reunion. Here are some reactions:

Since Bow starting this group that should mean all the Girlfriends should be on the show now!! Raise your hand if you agree#blackish pic.twitter.com/caGK3Zl35E

Y’all can’t do this to us now. We need a movie or a reboot after this #GirlfriendsNOW #blackish pic.twitter.com/QgMP5ON4SP

Me watching the Girlfriends back together after all these years: #blackish #GirlfriendsNOW pic.twitter.com/m5Lai2JS8H

You can’t be feminist if your not worried about difference races. Feminist is standing up for Arabic women , black women , Hispanic women, Asian women & white women. Not only standing up for feminist for certain races . #blackish pic.twitter.com/XDLVKfvVYl

Calling all creative South African individuals between the ages of 18 and 30;  a great opportunity at the Design Academy of Fashion awaits.
Good Life
2 years ago

This is what DJ Fresh is watching, reading, & listening to

DJ Fresh tells us what's on his cultural radar.
S Mag
2 years ago
Next Article