Image: Waldo Swiegers When it comes to the Renault Kwid and the Datusn Go, you'd be better off spending similar money on a more contemporary, substantial and safer B-segment contender in the pre-owned market.

You can hear it already. A distinctive cacophony from the industry sycophants, expressing that the related pair featured here are not thaaat bad. Such fence-sitting conveys more than a whiff of bull-you-know-what; which seems to be the general aroma among a certain sect of automotive content creators these days, in our murky world of influencers, sponsored content and so on.

People love free stuff. One local blog even had a unit of the orange car here as a long-term test vehicle, inspiring reams of gushing editorial. If only they had subjected it to interrogation that extends beyond hashtags and Instagram filters.

In the arsenal of defence is an argument that the models are better alternatives than the prospect of using a minibus taxi. A misguided and paternalistic sentiment, as if to show some genuine kinship with and consideration for the 15-million South Africans who commute using this form of public transport. Others assert that safety is relative - and that for decades, people survived without crumple zones and essential driver assistance features.

You would not want to crash either, because the overall structures of the vehicles remain unchanged

But it is 2019. It is disappointing that, when asked about the poor crash performance of some of their new wares, manufacturers rehash the comment that their vehicles satisfy the minimum criteria of national safety legislation.

Such was the case with the earliest guise of the Datsun Go, launched here in 2014, which scored a zero-star Global NCAP rating. And much of the same was echoed when the Renault Kwid, essentially a variation of the product, followed in 2017. That scored one star. In fairness, the versions of the models on sale this year have been improved.

The Datsun was the recipient of a more thorough makeover. The Renault, meanwhile, gained additional specification, though the most crucial thread between them is the availability of anti-lock brakes and airbags - at last. That said, you still would not want to crash either, because the overall structures of the vehicles remain unchanged. We bore this in mind at Zwartkops Raceway in Tshwane last week, as we gave them a thorough workout.

First up, a simple emergency lane-change task. A realistic undertaking, given the disregard for safe following distances you might see on any major freeway. The method in this case was to accelerate between 80km/h and 100km/h before swerving for the obstacle of cones ahead. Why so slow? For starters, pace is not a forte of either car - add to that the relatively short, straight-line distances between corners at our chosen facility.

Dissecting the performance afterwards, one can be glad, perhaps, that the speed was low. Look at the Go. See its two wheels dangling off the ground, basically rendering it a motorcycle for a few metres.

Image: Waldo Swiegers The Datsun Go couldn't manage to keep its tyres on the ground in a simple emergency lane-change task.

When all four of those skinny contact patches (165/70R14) were on tar yet again, the upset weight distribution required vigorous input to get things straight and tidy. We have driven all manner of performance cars at this venue previously. Never before had my nerves been as shaken as they were on this occasion.

At least the Renault Kwid kept all its tyres (155/80R13) pinned down. The resultant oversteer, however, took me by surprise. The accompanying imagery speaks volumes. Shocking to think that these models are peddled to young drivers unlikely to yet have the skill to counter unpredictable dynamics.

Image: Waldo Swiegers Though the Renault Kwid managed to keep its tyres on the ground, its oversteer was terrifying.

We established that dispatching evasive manoeuvres are not strong points of these cars. Nor are they particularly great at higher velocities. There are some anomalies to note. While the Datsun seemed more unsettled by our lane change, it tracks (comparatively) more confidently at speeds in excess of 100km/h. That could be due to the fact that it is the heavier car, tipping the scales at 865kg.

The effects of crosswinds are dramatically noticeable from behind the wheel of the Renault, which weighs the same as a Ziploc bag filled with burps. Fine, just slightly more than that, at 695kg.

So it is the sprightlier performer - moot point, maybe, since you would want to purposely avoid the right lane. What was assuring was the act of deploying those little anchors: the addition of anti-lock brakes ensured both cars pulled-up drama free and with negligible differences in distances between them. It is telling, indeed, that the finest part of your experience with the Kwid and Go involves bringing them to a stop and emerging unscathed.

The Go is powered by a 1.2-litre, three-cylinder, producing 50kW and 104Nm, mated to a five-speed manual. The Kwid has the same number of cylinders and a manual with the same number of forward gears. Its 999cc displacement is good for 50kW and 91Nm.

Both models can be had with comprehensive infotainment systems. This is a unique selling point in the category. It is an element that the brands have used to inveigle those younger, technologically savvy first-time buyers. You wonder if the cost of omitting those touch-screen setups could have freed cash to invest in strengthening the bodies of the vehicles. 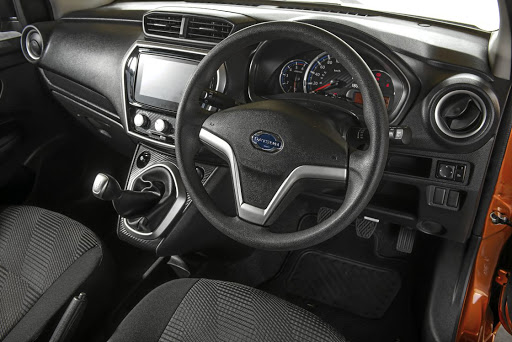 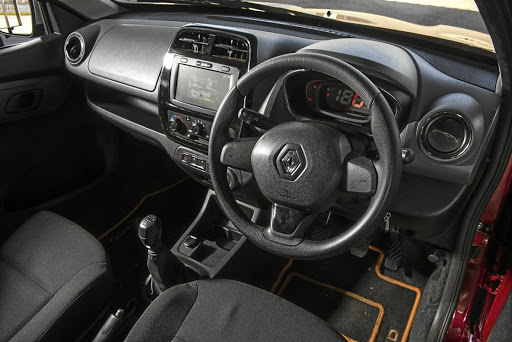 The Kwid makes little effort at disguising its cheap persona. It is a truly horrible place to be. In contrast it makes the Go seem like a luxury car. Commendably, Nissan has done a fair amount to remedy the deficiencies of the former interior. Improved materials, more durable upholstery and ergonomic tweaks (goodbye pull-and-twist handbrake); has created an acceptable ambience.

While this pair is undeniably subpar, it seems as if their manufacturers enjoy the last laugh when the monthly sales figures are released. And the joke is on us, SA consumers. In July, for example, Nissan managed to sell 548 units of the Datsun Go.

It was the bestseller in the range. Renault sold 768 units of the Kwid. Once again, it was the most successful performer in the range. These might be cheap entrants into the world of new car ownership with prices ranging between R137,900 and R166,800.

The cost of that is likely to be far dearer in the misfortune of a collision. A shrewder approach would be to explore the prospect of spending similar money on a more contemporary, substantial and safer B-segment contender in the pre-owned market. Stay woke.