Sorry to burst your bubble, but baby Sussex's name won't be Princess Nettie. Or Ginger 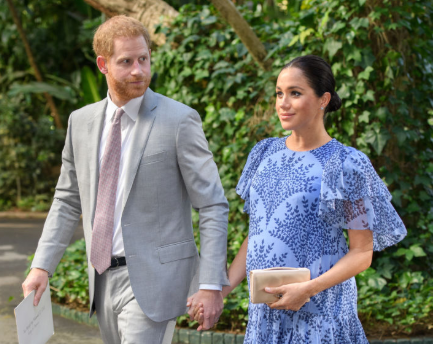 According to the experts, the Duke and Duchess of Sussex’s firstborn will almost certainly be a girl.
Image: Tim Rooke/Pool/Samir Hussein/WireImage

There is apparently very little doubt about the gender of the forthcoming Sussex whelp. Which means those brave Royal watchers who’d taken a flutter on the outside chance the new Lady Mountbatten-Windsor is to be named LeBron or Albus have now sadly lost their money.

According to the experts, the Duke and Duchess of Sussex’s firstborn will almost certainly be a girl, and she will in all likelihood be delivered early next month at Frogmore Cottage, their official pile at Windsor.

Happily, those few punters who have money on Harry and Meghan naming the baby Chardonnay are therefore still in the running.

But with the bookies giving it odds of 500 to one, it has as much chance of winning as Nettie or Ginger, other rank outsiders.

Welcome then to the arcane world of betting on affairs at the House of Windsor. It may not be as lucrative as more traditional streams, like horse racing or football. But, as Rupert Adams, communications director with bookmaker William Hill plc, explained on Friday, it does comprise a healthy chunk of the novelty or “specials” gambling sector, such as betting on the Eurovision song contest or which actor will play Batman after Ben Affleck.

Britain’s bookmakers, he said, will have pocketed about £5 million (some R92 million) by the time the baby is named. Betting will then start on the identity of her godparents. And so it goes.

Adams was briefing foreign journalists in London on Friday. Judging by the TV crews present, global interest in the Royal baby is strong, particularly among Asian audiences, and he wasted no time in getting to the heart of the matter. “It will be a girl,” he said. “Early May, not April. At home. Diana’s the favourite name at four to one.”

There is a rationale for the certainty about the gender, and it has nothing to do with the pink roses or pink balloons noted at last month’s baby shower in New York or the fact that Prince Harry had told a well-wisher at last year’s Invictus Games in Sydney that he was hoping for a daughter.

Despite the fact that Harry and Meghan were keeping mum about the baby, someone had clearly spilt the beans, Adams said.

Betting was closely monitored from the announcement of Meghan’s pregnancy in October, and remained more or less evenly split between boy or girl until late February, when a daughter began to emerge as an outright favourite.

Meghan Markle seems to be taking being a royal in her stride. The Duchess of Sussex recently completed her fir African Royal Tour which the ...
S Mag
3 years ago

“Nine out ten bets were suddenly for a girl,” he said. Accordingly, bookmakers changed their odds to make betting on a son more attractive. But still money came rolling in for a daughter, and in unusually large amounts.

“It was making no sense,” Adams said. “We cut the odds back, to two to five, and were still getting bets of £500 to win £200. That’s unusual, especially when the average bet on a Royal baby is a little more than £4. Who bets that much just to win that little, unless of course, they know something and they certainly know the result?”

All of Britain’s major bookmakers picked this up and stopped taking money on the baby’s gender within hours of one another. “We closed the betting at 4.33pm on Tuesday, April 9. We felt it was an unsustainable market. This was the first time in William Hill’s history that we’ve had to do this, close the betting in advance of a Royal baby’s arrival.”

The bookies are however still taking bets on the baby’s name. At the time of writing, Diana is the favourite, followed closely by Victoria, Isabella/Isobella, Alice, Grace and Elizabeth.

Other contenders include James, Arthur, Rose, Harriet, Alexandra, Edward, Eleanor, Catherine and Mary. Towards the back of the field, in addition to the outsiders already mentioned, are Loyce, Layla, Caden, Chad, Nigel, Shane and Kyle.

No-hopers, according to Adams — as, he maintains, is the case with the odds-on favourite.

“The punters obviously think it’s a good choice, a way to honour Princess Diana,” he said. “But think about it. Harry and William were traumatised by their mother’s death. Would Harry name his daughter Diana and be reminded of that on a daily basis?”

He feels it could be Elizabeth. Harry is rather fond of granny, it seems.

* The smart money, incidentally, is on the Netherlands to win at Eurovision. And Armie Hammer’s going to be the next Caped Crusader.