5 of the most shocking moments from the Oscars 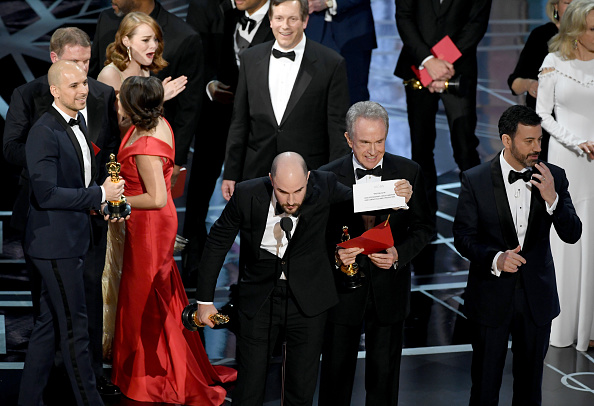 The Oscars are supposed to be the pinnacle of Hollywood success, but more often than not, they leave us feeling shocked and wondering what in the actual mess?

This year, Green Book won the Best Picture Academy award, beating out favourites like The Favourite (lol!) and Roma. The eventual winner's controversies around the falsehoods of the supposed ‘true story’, could have been ignored if those involved in the production of the film were not (in the course of the press run) accused of racism and Islamophobia.

But either way, the movie won and it’s not the first time shockwaves hit the Oscars!

So here are seven other times the Oscars stage left audiences and viewers in shock or laughing uncontrollably.

Similar to Green Book, the journey to the Oscars for La La Land was fraught with confusion, as many people didn’t understand why a movie about jazz was led by two white actors who couldn’t sing or dance.

But because #OscarsSoWhite, many pundits expected the film to collect the golden statues. However, when Warren Beatty announced it as the Best Picture winner, it turned out to be the biggest blunder in the history of the Oscars, as Moonlight (a movie about a young black man’s coming of age story as he figures out his sexuality), was actually the real winner.

The chaos that unfolded right in front of the world as one film crew had to hand over the award to the next film crew was just…well, shocking.

Chris Rock was coming along fine as the host of the 2016 ceremony, until he thought it would be funny to announce Stacey Dash as the Academy’s newly minted ‘director of minority outreach’.

Dash, a Trump supporter who suggested that BET and Black History Month were irrelevant and should be cancelled, left the audience feeling awkward (although there was some laughter), when she declared “Happy Black History Month” to an audience that was clearly still grappling with #OscarsSoWhite. At least the incident blessed us one of the most memorable memes ever.

First, read this name: Idina Menzel. I-di-na Men-zel. Now listen to John Travolta say it. Or rather butcher it with a blunt machete. We might be laughing, but we are not letting this one go…

When the then 73-year-old Jack Palance won the award for Best Supporting Actor, even he couldn’t believe it because, as he explained in his acceptance speech, Hollywood producers dismiss actors of a certain age because they believe they can no longer do many things, including push-ups.

The actor then wanted to prove right there on the world stage that an oldie like himself could still hold his own when he got down and did push-ups (skip to 01:20)! Even with one hand!

Robert Opel was an American photographer, artist, art gallery owner and a gay rights activist, but after the 1974 Academy Awards took place, he famously became the Oscars Streaker.

The actor David Niven was giving a very grave speech about the importance of the Best Picture award when Opel dashed in birthday suit across the stage (skip to 0:55), leaving everyone laughing and no longer taking themselves so seriously.