A group of friends  started an organisation with one sole purpose: To become the biggest group of Black Jeepers in South Africa. After being rejected for recognition by Jeep South Africa these Jeepers decided to do things on their own. That is when the Jeep Revolution was born. The Jeep revolution started in Venda and has since expanded to other provinces around the country. They will host their 3rd annual Jeep Revolution event in Venda next year.

Not only are they 4x4ing through Africa but they are being charitable as well. To date the organisation has already held two charity events . Their first charity event was held in the North West. Being a non- profit organisation itself, founder of the Jeep Revolution, Richard Sinthumule says that charity is something very close to his heart.

“ We provided a charity home with groceries, funds and blankets last year. We even invited some Jeep Freaks who have never been to Soweto to see the sites of Vilakazi street,” says Richard.

Jeep Revolution’s mission is to tour South African hard to reach tourist destinations. “We aim to unlock the hidden gems of our beautiful nation through our experiences and journeys. We believe in touching lives of those in these remote locations and aiding much needed charity work in places where we hold our events. Our goals are to expose ordinary South Africans to uncharted tourist destinations and further exposing them to the world,” he says.

South Africa is country so rich in culture and natural wonders and the Jeep Revolution helps us see exactly what’s out there. Holiday destinations at our doorstep, what more can we ask for?  With over 100 members since its inception in 2016 one would say that the organisation is well on its way to becoming thee big black Jeep group of South Africa. 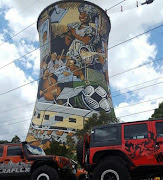 What’s in store for Jeep Revolution next?

Their Namibia Tour: This tour forms part of Jeep Revolution annual travel tour to SADC countries. It will be replacing the Mozambique and Swaziland two  country tour. "We aim to create attention to bridge tourism and events between our neighbouring SADC regions," he says.

Soweto Charity Run: This is an  annual one day event where the organisation chooses a charity home in a Township in Gauteng. "This event has broken all racial divides as we have found that more experienced 4x4 drivers which was a traditionally white dominated activity, has brought both racial groups together to explore Soweto," says Richard.