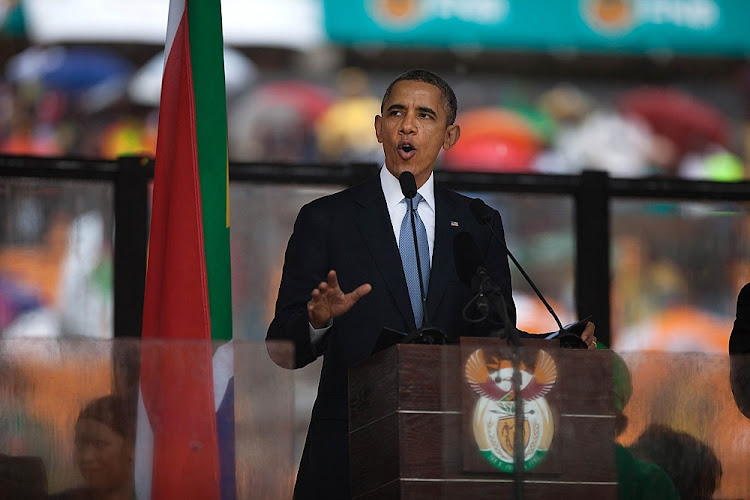 Former US president Barack Obama stole the show at the recent Nelson Mandela Annual Lecture in Johannesburg. Speaking of the great work done by Madiba, he also noted serious issues which continue to plague the globe, such as propaganda, sexism and racial and religious discrimination.

Although his speech highlighted serious issues, Obama was not shy to have a little fun. He clapped back at President Cyril Ramaphosa, who made fun of his dance moves, and couldn't help blushing when the crowd chanted, "Yes, we can!" a slogan made popular during his first run as president. Those attending praised Obama's skills as an orator.

"There are many similarities between them, but unfortunately he cant dance like Madiba could" - Pres. @CyrilRamaphosa New meme alert😅😂... Obama's reaction #MandelaLecture #MandelaObama pic.twitter.com/bLGcTjG3Yv

#Obama is a true orator. Not a paper in sight for his speech, the guy just speaks!!! #MandelaLecture

Here are five quotes from Obama's speech that were just too lit to ignore.

“Madiba’s light shone so brightly, even from that narrow Robben Island cell, that in the late ‘70s he could inspire a young college student on the other side of the world to reexamine his own priorities, could make me consider the small role I might play in bending the arc of the world towards justice.”

Obama might have made a number of his fans tear up with this one, sharing the reach of Mandela's determination during his struggle against apartheid.

"You have to believe in facts. Without facts there is no basis for cooperation."

The former president held no punches when referring to presidential successor, Donald Trump. Obama threw this jab referring to Trump and his administration at large who have refuted climate change.

"I believe in Nelson Mandela's vision. I believe in a vision shared by Gandhi and King and Abraham Lincoln. I believe in a vision of equality and justice and freedom and multiracial democracy built on the premise that all people are created equal and they're endowed by our Creator certain inalienable rights. And I believe that a world governed by such principles is possible and that it can achieve more peace and more cooperation and pursuit of a common good."
Obama has many icons to who he looks up and this vision of freedom is based on not only that of Mandela but also Mahatma Gandhi, Martin Luther King and Abraham Lincoln, who were proof of the unity and freedom he believes in."

Obama has many icons to who he looks up and this vision of freedom is based on not only that of Mandela but also Mahatma Gandhi, Martin Luther King and Abraham Lincoln, who were proof of the unity and freedom he believes in.

Populists undermine every kind of institution and use barely-hidden racism. The free press is under attack … social media … has proved to be just as effective promoting hatred.”

Another jab at the rise of Donald Trump, Obama spoke out about how access to information breeds a number of difficulties.

Sometimes you have to compromise. It doesn't mean abandoning your principles but it means holding on to those principles and having the confidence that their going to stand up to a serious democratic debate."

Obama shared his thoughts on what it would take for individuals to fight for what they felt was right.