How designer Rich Mnisi's shaking up the SA fashion scene 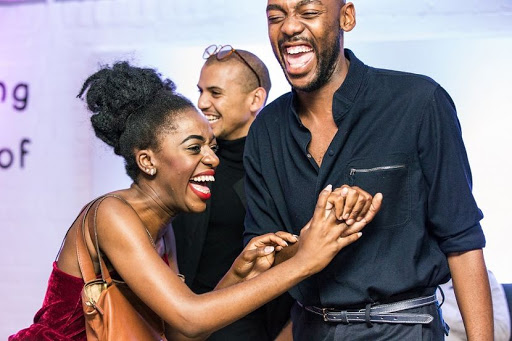 Suzy Mukendi and Rich Mnisi crack each other up during the #ForeverChuck, Converse event at Museum of African Design in Maboneng on March 09, 2017 in Johannesburg, South Africa. Photographer and an all-round creative Fhatuwani Mukheli and assorted influencers customised their many Converse sneakers with, in some cases, the help of professionals. (Photo by Gallo Images / The Times / Mariska van den Brink)

In the three short years since Rich Mnisi made his runway debut, he's become a key player in the new wave of young designers who are redefining the local fashion industry.

Through his eponymous label, Mnisi is pushing boundaries and using fashion to tell the South African story to local and international audiences.

"We're in a time where [the processes of] exploring our identity, our heritage and our future are coming together to create a very important narrative," says the Joburg-based designer.

"The brand explores the synergy between heritage and futurism. It tells the story of modern culture while never forgetting to uphold the treasures ingrained in Africa."

Mnisi's designs are defined by a constant sartorial experimentation with silhouette, layering, print and texture. There's a strong inclination towards non-binary looks that are ultra-wearable must-haves for men and women alike.

In fact, his garments have garnered praise not only for their uniquely African flavour, but for their gender-bending aesthetic.

With his last two collections, Mnisi sparked conversations about the fluidity of  gender lines in fashion by sending both male and female models down the runway in bell sleeves, jumpsuits with plunging necklines and pieces embellished with giant flowers.

The designer's long been experimenting with fashion. He traces the roots of his sartorial obsession back to his childhood.

"Growing up I was always in awe of my sister’s desire to outshine her friends. She looked at a pair of jeans and she saw a skirt – the way she reworked and altered her clothing was absolutely inspiring," he says with a warm smile and demure charm.

"She triggered my desire to play with clothes. At the age of 5, I was also cutting up clothing, wrapping curtains around my body and cutting out clothes from magazines to dress up my paper-dolls.”

Today Mnisi's work is featured in the type of magazines he once cut up; he's appeared in a host of local and overseas publications including L'Officiel Manila, Vogue Italia and WWD.

He's also one of a handful of talented designers that created exclusive designs for the recently launched 'Style By SA' capsule collection for Woolworths.

With a number of hit collections and collaborations under his belt, one thing's for sure: Mnisi is set to continue shaking up the SA fashion scene.