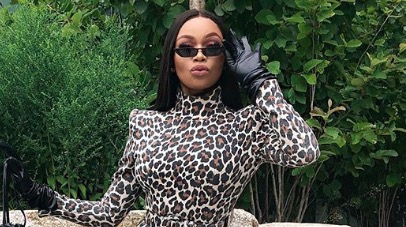 Mzansi's celebrities joined Americans to celebrate Halloween at the weekend and they served nothing but hot looks!

While people on the socials were still debating whether it is appropriate for South Africans to celebrate a holiday they “don't know much about”, or if the issue was really as deep as some made it out to be, Mzansi celebs concentrated on making the most out of the day that allows them to be any version of themselves that they wish to be.

Famous faces like Bonang Matheba and Moozlie showed off their sexy sides. B* rocked an all-red outfit that showed off a sexy version of a she-devil. She was drenched in red, from her devious horns to her perfect shoes. On the other spectrum of sexy was Moozlie, with a cheetah print catsuit that sat on her body like a body glove.

Pearl Thusi and her babies Thando and Okuhle went with the more elaborate costumes look. Thando was dressed as a “modern day Egyptian”, Okuhle as the most fabulous unicorn you'll ever see and Pearl as a “mummy”.

Ayanda Thabethe and Sho Madjozi channelled their fave icons and spent the day being the people they look up to. Ayanda recreated an iconic look by the Kardashians — which actually got a “yasss!” from Kim K herself and Sho dressed up as Leleti Khumalo's iconic character Sarafina from the film Sarafina!

Check out how they all knocked their looks out of the park!