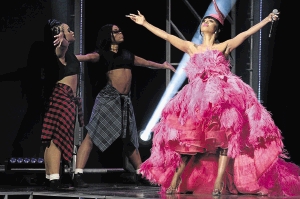 Kelly Kumalo performs during the Sama25 at the Sun City Superbowl. This year the show goes virtual. / Veli Nhlapo

The Covid-19 pandemic has forced organisers, the Recording Industry of South Africa (RiSA), to scrap the big-budget glitz and glamour red carpet affair that stages in Sun City.

"We look forward to the Sama26 virtual experience. Our teams are hard at work to deliver a show that we will all be proud of given the current state the world is in. I invite you all to tune in, plug in and do it for the culture," Risa CEO Nhlanhla Sibisi said.

The show will be structured over 30-minute episodes that will air between August 3 and 7. The episodes will broadcast on Mzansi Magic at 9.30pm; while also streaming on digital platform My Muze.

"The South African Music Awards have always been a platform where talented Mzansi artists have been recognised for their excellence," said Nomsa Philiso, the director of local entertainment channels at M-Net.

"As a channel that has a track record of showcasing local talent across several platforms, we are very proud to be partnering up with Sama26 to give our viewers front-row seats to this virtual showpiece."

The curated show will feature two hosts with a line-up of special guest presenters, panelists and performers. The awards have been previously hosted by the likes of Somizi Mhlongo, Dineo Ranaka, Trevor Noah, HHP and Bob Mabena. This year's awards are expected to reintroduce the Best Kwaito Album category.

Nominations will be released later this week. The awards are usually held during the first week of June, while nominations are revealed in late March or early April. Several postponements have marred this year's celebration since the lockdown.

No glitter as 2020 Saftas are cancelled amid Covid-19 pandemic

There will be no glitz and glamour for Mzansi's biggest film and television industry this year.
Entertainment
1 year ago

Minnie Dlamini-Jones is not skipping gym to ensure that her body is banging as host of the third DStv Mzansi Viewers’ Choice Awards (DMVCA).
Entertainment
1 year ago
Next Article