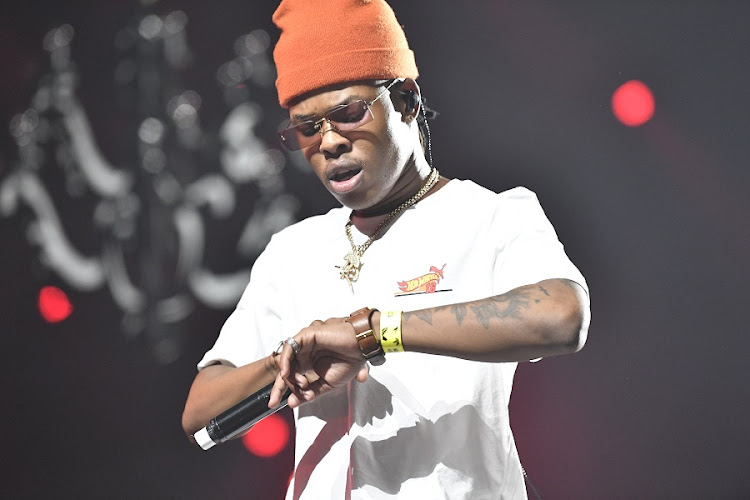 Nasty C said 'sudden beef' with people he thought were on his side was to be expected as he continues to blow up.
Image: GALLO/FRENNIE SHIVAMBU

While Nasty C continues to dominate Mzansi and the world with his hits, the rapper believes that not everyone will be celebrating his success.

Earlier this week, DJ Speedsta and Nasty C got into a heated exchange of words on Twitter after Nasty called Speedsta out for allegedly “lying” about ownership of the song Bamm Bamm.

In an interview with SowetanLIVE sister publication TshisaLIVE, Nasty C shared his disappointment over how the whole thing went down. The rapper said he believed Speedsta's Twitter rant stemmed from “jealousy” over his success.

Nasty added that even though he was expecting such behaviour from other people in the industry, he couldn't have foreseen that Speedsta would lead the charge.

Nasty C turns to the Bible during lockdown, urges everyone to pray

We need all the prayers we can get!
Pic of The Day
2 years ago

“I think it's more of a jealousy thing more than anything. I don't see how his [Speedsta's] initial point has to do with any of the stuff he went on to say. His first thing was that he gave me a song, which I tried to correct him on because he didn't. Then he only apologised for his mistake 10 tweets down the line ... like only then he admits that there might have been a problem with his wording in the first tweet. Something he should have said in the first place instead of going on and on.

“He instead wanted to talk about how I've changed and how I think I've arrived now because of (the Def Jam deal) and what not. You could tell the whole thing stemmed from something else. But, it's okay. I was expecting that anyway - maybe not from him - but it's cool, it's whatever,” the rapper said.

In case you missed the twar, this is the video and tweet that started the whole thing.

Hawu @speedstabro CAP 🤣🤣🤣 CAP CAP CAP. FIRST OF ALL NIGGA, I MADE THE BEAT, DROPPED HOOK & VERSE AND SENT IT TO YOU, THEN YOU SLEPT ON IT, SO ME & PIERRE DECIDED TO SNATCH IT BACK AND DROP IT.. YOU DIDNT GIVE ME NO SONG BRO 🤣🤣🤣 WHYYYY pic.twitter.com/fhCUpWNluh

There was no coming back when the pair started taking shots at each other and while some tweets have been deleted (mostly from Speedsta's account) the spicy twar got real dirty at some point.

Adamant that the song in question was his, Speedsta went on to counter every attempt from Nasty to try to prove otherwise. He even went on to tag Def Jam and “leaked” another collaboration that they had done. The song is called Side Chick and features Aewon Wolf.

It was clear that there was irreparable damage done to their relationship when Nasty declined an interview with Speedsta.

Nasty has since said that he's “over the whole thing now”, however it seems highly unlikely that the relationship the pair had will be fully restored.

Check out the rest of the tweets from the exchange below:

That’s not the point, point is you acting like you gracefully gave me the song ‘coz I needed it’, when it wasn’t yours to begin with

What does my signing have to do with anything. This 👇🏾 should’ve been your first and only response to the matter. Lol u just getting touched for whatever personal reason 🤷🏽‍♂️ I hope you’re okay man you’re Coming off a little sad out here. pic.twitter.com/TUXwZJi4E2

Nasty C said "sudden" beef with people he thought were on his side are to be expected as he continues to blow up.
Image: GALLO/FRENNIE SHIVAMBU
Next Article