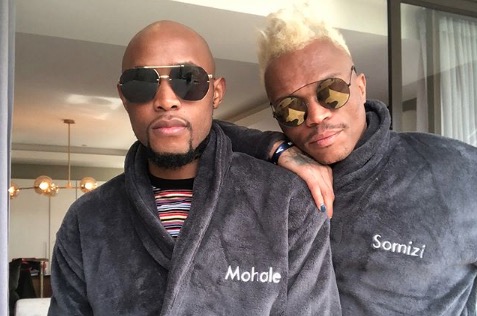 Since officially tying the knot, Mzansi's favourite couple Somizi and Mohale are ready to Step In The Name Of Love and are urging you do so the same

As fans wait with anticipation for the final episode of their four-part Showmax wedding special, Somizi and Mohale: The Union, Somhale shared how they did iStep - which showed them flexing some serious dance moves.

Cava the video below:

Last week we witnessed Somizi U-turn on red bottoms being compulsory, his daughter walking him down the aisle and flowers that cost as much as a house.

During a meeting with his production team, Somizi explained that they were not turning away anyone who didn't fit the dress code. "Initially red bottoms where compulsory but 'pocketly' people are not OK [with it], so we then said, 'OK then, whoever can afford can come, but they were not going to be part of the group picture."

With a mandate that his guests should leave their phones at the door when entering the venue, Somizi spoke fondly about his daughter walking him down the aisle and buying her two pairs of red-bottom heels.

"I even told her that I'd like for her to walk me down the aisle, which is kind of like weird because these trolls are going to be like, 'This is not how it's supposed to be naturally, where a daughter walks her father down the aisle to marry another man that is her age!'

"Anyway, I want my daughter to walk me down the aisle because my mother isn't doing well."

While planning their wedding, the couple hinted that their flowers cost them as much as a house, adding that they were afraid of Twitter users dragging them for not putting their money to better use.

"Guys, the amount we paid for flowers ... is ridiculous. Twitter will say we could have bought a house for the homeless or taken a child to school. You could've ... That person hasn't even bought a slice of bread for his neighbour."