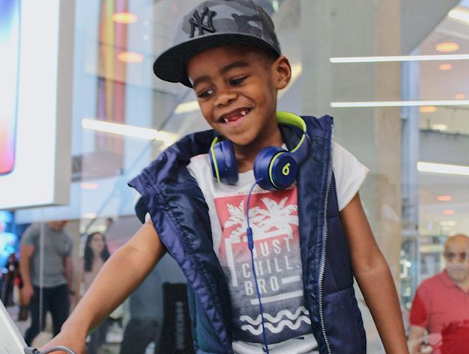 International phenomenon DJ Arch Jnr is a major hit in more ways than one.

The seven-year-old DJ won South Africa’s Got Talent back in 2015 at a tender age of three.

Setting his eyes on more titles to bag, Arch Jnr attempted to impress the judges of Britain's Got Talent: The Champions by becoming the ultimate champion.

BGT returned for another week with nine more acts taking to the stage in a bid to make it to the show’s grand final.

Along with the usual mix of singers, dancers, comedians and magicians, one-act who impressed Simon Cowell, Alesha Dixon, Amanda Holden, and David Walliams, as well as the viewers, was our very own DJ Arch Jnr.

Speaking to SowetanLIVE''s sister publication TshisaLIVE, Arch's dad, Glen Hlongwane, said his son was very proud of his performance, as you could see from the glow on his face after he finished performing.

"Arch knew  he nailed it. He was very happy to yet again get such positive responses from Simon Cowell since America's Got Talent: The Champions not so long ago. Also, the fact that he pulled off another great performance."

The proud father said Cowell came to them backstage and told them that AJ's performance was better than the one on America's Got Talent.

"So this means, he's showing progress."

Glen said Arch placed third out of all the nine acts, and only two were permitted to go to the finals.

"We just missed the spot by an inch."

Despite not making it to the finals, Glen said he was proud of Arch for having placed third out of nine mazing acts

"Him placing third was incredible. We hope South Africa is as proud of him as we are."

Cava how DJ Arch Jnr shut it down on Britain's Got Talent: The Champions:

Britain's Got Talent: The Champions | Season 1 | Episode 3 1st Round Audition: DJ Arch Jnr #BGT #BritainsGotTalent #TalentRecap For more HD videos, news, analysis and recaps of Britain's Got Talent: The Champions – please subscribe to Talent Recap UK: http://youtube.com/talentrecapuk TALENT RECAP ON SOCIAL: YouTube: https://www.youtube.com/talentrecapuk/ Facebook: https://www.facebook.com/talentrecap/ Twitter: https://twitter.com/TalentRecapUK Google+: https://goo.gl/jR9eS5 Instagram: https://www.instagram.com/talentrecapuk/ ABOUT BRITAIN'S GOT TALENT: THE CHAMPIONS "Britain’s Got Talent: The Champions" brings together the world’s most talented, memorable and all-around fan-favorite acts from past seasons of "BGT" and the other "Got Talent" franchises, spanning 194 territories. The "Got Talent" format has had more than 900 million global viewers since it began airing in 2006 and has aired in 194 markets worldwide. "Got Talent" holds the Guinness World Records title as the Most Successful Reality Television Format in history, with 70 local versions produced across Europe, Asia Pacific, the Middle East, Africa and the Americas. The series, from ITV, Fremantle and Syco Entertainment, will feature the star-studded judges panel from "Britain's Got Talent" - Executive Producer Simon Cowell, David Walliams, Amanda Holden and Alesha Dixon - as well as Host Duo Ant & Dec. Find Britain's Got Talent: The Champions trailers, full episode highlights, previews, promos, clips, and digital exclusives here. ABOUT TALENT RECAP: Talent Recap is the #1 independent website which is exclusively dedicated to the fans of the most popular talent shows around the world. As passionate fans of these shows, we provide news, analysis and fan engagement on America’s Got Talent, Britain’s Got Talent, The Voice, The X Factor, American Idol, The Four and its contestants. Talent Recap https://goo.gl/nZgzW8

It looks like DJ Arch Jnr's lil sis could soon be taking over his spot.
Pic of The Day
3 years ago

This is the content Mzansi signed up for!
Entertainment
3 years ago

WATCH | Arch Jnr on why he DJs: 'I love making people dance'

Arch knows what makes him happy and he's not about to stop.
Entertainment
3 years ago
Next Article