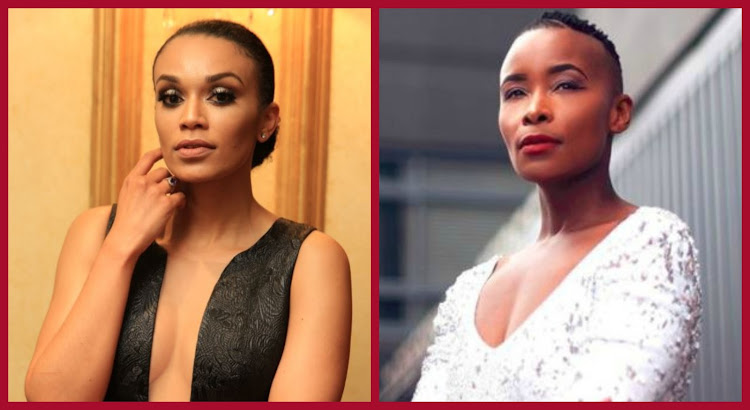 Pearl Thusi and Bonnie Mbuli found themselves on the Twitter trends list on Thursday after trading blows in a spicy twar over colourism.

Pearl was the talk of Mzansi earlier this week when she clapped back at a hater, who called her talentless and suggested that she only gets top gigs because she is light skinned.

Pearl's lengthy rant about being discriminated against because of her complexion sparked a massive debate online and at water coolers across SA.

Looks like school was in session...
Pic of The Day
2 years ago

While several celebs weighed in on the matter, Bonnie soon found herself in the spotlight for her remarks.

Along with a meme Bonnie posted a message, saying she "almost" sympathised with light-skinned girls going through the most. She then shared another meme with a more direct message about light-skinned actresses, which many saw as a reference to Pearl's claim that she had lost out on roles to darker-skinned women.

"So when a light-skinned actress complains about the one or two roles they didn’t get because they weren’t dark enough, I’m like but the part your crying about was being the slave who gets raped and beat up in the thing, people who look like you have never had to be in that position to begin with," Bonnie wrote.

So when a light skinned actress complains abt the one or two roles they didn’t get coz they weren’t dark enuf; I’m like but the part ur crying abt was being the slave who gets raped and beat up in the thing, ppl who look like u have never had to be in that position to begin with. pic.twitter.com/OzdQZJy1gV

Bonnie went on to claim, in a response to a follower, that there were far fewer roles for dark-skinned women, and these were often roles as sufferers, diseased or slaves.

So the point im making is that dark skinned actors have a smaller pool of roles to choose from already, they are the slaves, the diseased refugees, the stacked oily bodies in the slave ship,the ones who look good as sufferers. While standing up to protest against this system...

They now have to carry the wounded light skinned actresses who have been enjoying the care free-milky -skinned -love interest- roles but are now mad coz they didn’t get that one role in Black Panther. The entitlement is just....

Pearl responded to Bonnie's tweets by asking about her international career and telling Bonnie to stop spreading "negativity".

"You have absolutely no clue which other parts I didn't get, but because it makes you feel better to believe my acting career is working out only because I'm light skinned. And for someone who survived depression and wrote a book about it you sure love spreading negativity," Pearl added.

You have absolutely no clue which other parts I didn't get but because it makes you feel better to believe my acting career is working out only because I'm light skinned.

And for someone who survived depression and wrote a book about it you sure have love spreading negativity.

This woman acting like she paid taxi fare to my auditions and knows my whole life LMAO.

Pearl challenged Bonnie to call her up directly to speak about the issues she had and offered to get her in touch with her agent for roles beyond what Bonnie said dark-skinned actresses were given.

Bonnie responded by claiming that the debate was not about Pearl and the actress should not place herself at the centre of it.

"Enough with the martyrdom Pearl, I was talking about actresses, angaz’ ukhuthi ungenaphi!" she added.

Pearl, this isn’t about you, you can’t place yourself at the centre of such a huge issue, it can’t be reduced to a twar, I don’t know your shoe size but if you feel like it fits, then wear it ! https://t.co/IOa2sc8fLT

Pearl acknowledged that colourism is real, but said she would not apologise for who she is or be bullied because of it.

"Colourism is real guys. I have dark-skinned family members. I saw it happen in my own home. It sucks. But please don't blame me for it. Help me be part of the solution. I will not let you think my skin tone means I'm a target for your bullying. I will fight back. Count on that," she tweeted.

She also slammed actresses who were upset about her getting roles and those who had reduced her to a "nameless 'light-skinned actress'".

I lot of actresses are also upset because God keeps choosing me and they believe I'm not worthy.

I know how much more talented u believe you are. All the whispers always make it back to me. I know who u are & I know what u've said. I smile & pray God blesses & heals u.

Sisi has in her mind has reduced me to a nameless "light skinned actress" . That's all she sees. My colour. Can't even acknowledge my name.

Imagine I had said dark skinned actress. Yall would destroy me.

This is very personal. She has no respect for me. Yesses.

She also called out Bonnie for telling a critic to sit down during the debate.

In this industry we tell the stories of the people you say have no range for this conversation bonnie. Dnt let your hate for me make you drag other people down.
We tell their stories. It hurts to listen to their opinions sometimes I know.
However she wasnt attacking u personally. https://t.co/W4TFM3clvf

Meanwhile, Pearl Thusi's bestie, DJ Zinhle, again defended her friend, while also expressing her concern for how her daughter, Kairo, will be treated because of her light complexion.

So what are we saying here guys? What can my light skinned friend do to make this right? Not go after her dreams?

Also, did she choose to look the way she does? Already worried my my Kairo. ?

Bonnie Mbuli to parents: Don't gossip about other parents with your children

Bonnie believes that it is irresponsible of a parent to put a child in that position.
Entertainment
2 years ago