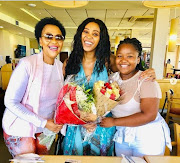 Former first lady Tobeka Madiba-Zuma paid Sbahle Mpisane a visit over the weekend and the two both spoke about the special occasion on their social media accounts.

Sbahle was recently released from hospital after being involved in a horror crash which left her fighting for her life. She spent months in hospital recovering and said her release was a 'miracle.'

Sbahle's family has strong ties to the Zuma family. Sbahle posted a picture of herself with Tobeka and said that their conversation had left her at ease and with peace.

"It amazes me how one positive talk with Mum Zuma is yet to change a few of my days. Blessed with happiness and peace of mind."

The former first lady also shared pictures of their encounter on social media and spoke about the power of God.

She commented on Sbahle's snap and said "we love you more than it show‚ hun."

There is power in the name of Jesus. Here is my worship smile😁. I give it all over to you Lord. You, know, sometimes in life, situations are going to occur where you may look to the left or the right and you can't find any answers and you can't find anybody to help you but I'm reminded of the Word that says they that wait upon the Lord, He shall renew their strength. They shall mount up on wings as eagles. They shall run and not be weary. They shall walk and not faint. You've got to learn how to wait. We waited upon you Lord, when all hope was gone. You showed up and did not let us down nor broke our hearts #god #is #love #serve #a #faithful #god ✝️