Prisoners turn into KnitWits for Mandela 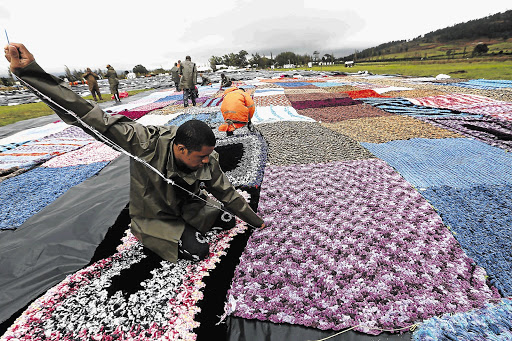 Prisoners countrywide have crocheted thousands of blankets to keep poor people warm this winter and break a world record. The blankets were laid out yesterday across 12000m2 at Drakenstein prison in Paarl, where Nelson Mandela took his first steps to freedom in 1990. The record for the largest crocheted blanket, set in India, is 11148.5m2
Image: SUPPLIED

Prisoners across the country have crocheted thousands of blankets to keep poor people warm this winter and break a world record.

The blankets were laid out on Thursday across 12 000 square metres at Drakenstein Correctional Centre in Paarl‚ in the Western Cape‚ where Nelson Mandela took his first steps to freedom on February 11‚ 1990.

On Friday‚ they will be evaluated by officials from Guinness Book of Records in the hope of reclaiming the record for the world's largest blanket set with a 3 377 square metre attempt at the Union Buildings last year by the 67 Blankets for Nelson Mandela Day campaign. The record has since moved to India.

Campaign founder Carolyn Steyn said: “We have chosen 22 April to mark 22 years of our democracy. This year is going to be a memorable day when we cover the grounds of the very place our dear Madiba first stepped out and felt freedom underfoot.”

“It presents an opportunity where inmates across the country are giving back to society‚" said Modise. "Key to rehabilitation is empowering offenders with skills to function effectively in society upon their release. It is therefore encouraging to see more male offenders taking part in crocheting‚ an activity that has always been labelled to be feminine‚ yet it fosters discipline‚ patience and boosts self-esteem.”

Since its launch in 2014‚ "KnitWits for Madiba" - the nickname given to blanket makers - has spread around the world‚ but Steyn said the prisoners' participation was "momentous".

“The fact that thousands of men and women serving sentences in South Africa will be largely responsible for keeping thousands upon thousands of people in impoverished communities warmer over all the winters to come‚ in the name of the greatest prisoner of them all‚ is … indicative of a healing nation‚” she said.

The 20 tons of blankets‚ containing donated wool worth around R7-million‚ will be distributed to the provinces they came from after the record attempt. – TMG Digital