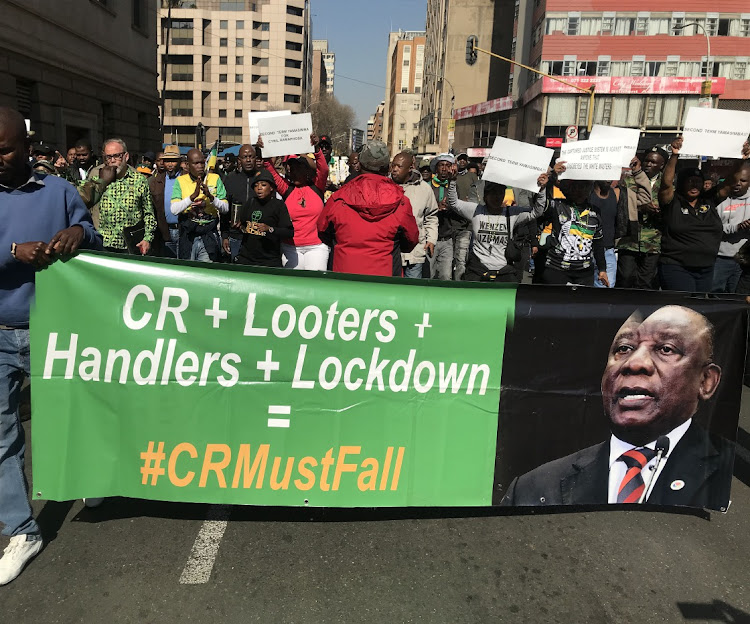 A group of ANC members led by Carl Niehaus and Supra Mahumapelo march to Luthuli House in Johannesburg to demand President Cyril Ramaphosa step down. The writer says those who went to Luthuli House were led by disgraced, thieving politicians.
Image: Freddy Mavunda

The ANC had a meeting on the East Rand while another "ANC " was marching to Luthuli House. In normal circumstances, this was strange but not with the two factions in this organisation. Those who went to Luthuli House were led by disgraced, thieving politicians.

They led hordes of the gullible to believe the present dire situation in this country was caused by the present government led by Cyril Ramaphosa. On the contrary, they are the ones who created this mess and helped the Guptas siphon off billions of rand out of the country.

They did that under the supervision of their master in Nkandla; they are the ones who should rot in jail. They are selfish, unrepentant, unpatriotic criminals posing as politicians.

Organisations march in Durban to demand arrest of Ramaphosa

A group of organisations on Monday called on KZN police commissioner Lt-Gen Nhlanhla Mkhwanazi to arrest President Cyril Ramaphosa for the alleged ...
News
4 weeks ago

ANC Members worried about 'weakened' secretariat ahead of conference

Several ANC provincial leaders and structures have downplayed concerns that there could be a crisis at the party's headquarters where the ...
News
7 months ago

"The fact that he is suspended does not disqualify him from upholding the organisational discipline and other principles that must be observed by all ...
News
1 month ago
Next Article