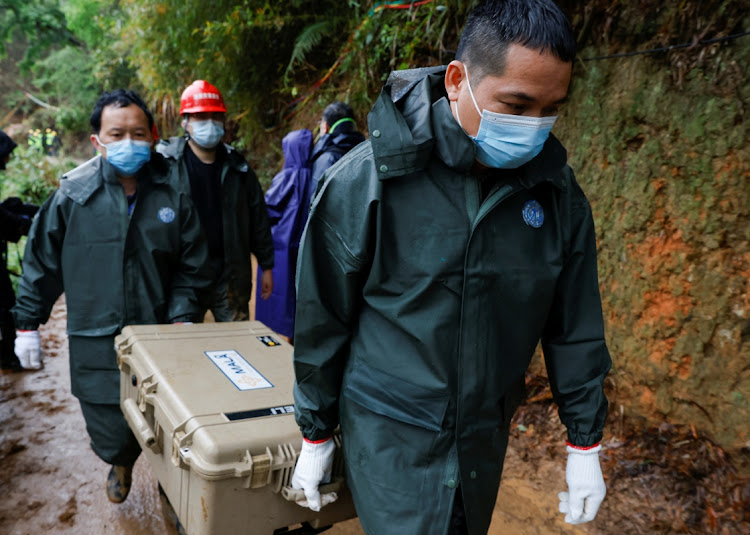 Workers carry a case at the site where a China Eastern Airlines Boeing 737-800 plane flying from Kunming to Guangzhou crashed, in Wuzhou, China on March 24, 2022. The magnitude and horror of the crash defies aviation logic, the writer says.
Image: Carlos Garcia Rawlins

It is indeed unwise to speculate on the probable cause of the gruesome crash of China Eastern Airlines crash on March 21. The magnitude and horror of the crash defies aviation logic.

The Boeing 737-800NG is a superb aircraft that is the workhorse of global aviation.

The vertical nose-down plunge of 20,000 feet in less than one minute is unprecedented in aviation circles. The scope and depth of this sonic plunge is extraordinary, as it sends shivers down one's spine.

It is unprecedented for an aircraft at cruising mode to react in such a violent manner. The shattering impact of this bewildering plunge resulted in the plane disintegrating into over 49,000 pieces.

Commercial passenger planes are designed so that their natural tendency is to level off in flight. Farmers who saw the plane crash mention black and white smoke –  black smoke is an indication of burning fuel, while white smoke signifies leaking fuel.

A Boeing 737 will glide perfectly well even if all its engines failed, it is virtually impossible for it to simply fall out of the sky. Tests and simulation scenarios reveal that a stricken plane could fly for around 60 miles if it loses its engines at cruise altitudes of 29,000 feet. They are designed to glide through the air even with no thrust.

Two mysterious events shroud this deadly crash: a part that was found 10km away and a possible attempt at recovery just before it crashed at tremendous speed. While plummeting, something mysterious took place, the plane pulled up at an altitude of 7,425ft, climbing to 8,600 feet for 10 seconds.

The flight data recorder was embedded 5ft into the ground. Impact at such a high speed obliterated the aircraft. On January 31 2000, Alaskan Airlines Flight 261 nosedived into the Pacific Ocean, killing all 88 on board.

The accident was caused by a jammed horizontal stabiliser. Provide that the cockpit voice recorder and the flight data recorder survived the enormous impact, the mystery of Flight MU5735 will be uncovered.

Chinese searchers found on Wednesday one of two black boxes from a China Eastern Airlines plane that crashed this week in forest-clad mountains with ...
News
3 months ago

Chinese investigators began examining the cockpit voice recorder from a China Eastern Airlines jet that plunged into mountainside with 132 people on ...
News
3 months ago

Rescuers in China scoured heavily forested slopes on Tuesday with hopes fading of finding any survivors from the 132 people aboard a China Eastern ...
News
3 months ago
Next Article