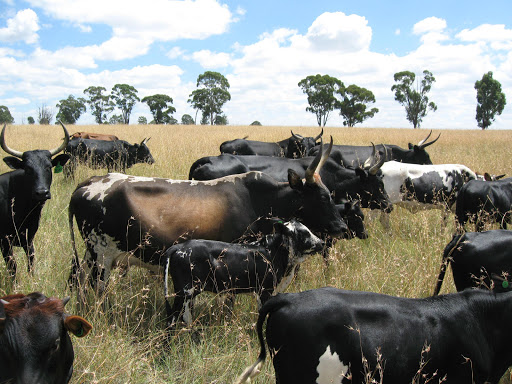 A ban on transporting and moving cloven-hoofed animals has been imposed in a number of districts in northern KZN following an outbreak of foot-and-mouth disease.
Image: Justinjerez/ Wikimedia Commons

The recent outbreaks of foot-and-mouth disease (FMD) in KwaZulu-Natal, Limpopo and North West have once again put the importance of biosecurity in the spotlight. Biosecurity entails preventing new diseases from entering and spreading on a farm or production unit by applying the right management practices. A good biosecurity programme helps to lower the risk of pathogens being transferred from farm to farm. Effective biosecurity measures include isolation, traffic control and sanitation that aim to reduce exposure to bacteria, viruses and other organisms that may infect animals with disease.

Foot-and-mouth disease is a contagious viral disease that affects livestock, causing production losses. The disease affects cattle, pigs, sheep, goats and other cloven-hoofed animals, both domestic and wild. It does not affect humans. In August, the disease affected 22 sites in KwaZulu-Natal.

SA’s beef and the broader beef industry boasts an annual turnover of R80bn and is responsible for an estimated 500,000 jobs. The National Agricultural Marketing Council estimated that the last foot-and-mouth disease outbreak, in Limpopo in 2019, cost the economy R4bn. The consequences of the outbreak are enormous for the country‘s foot-and-mouth disease-free status and our ability to export.

On March 18, the KwaZulu-Natal department of agriculture and rural development imposed a ban on the movement of livestock in the Mkhanyakude, Zululand and King Cetshwayo districts in an effort to curb the spread of the disease.

In reaction to the outbreaks, the government is pleading with farmers and cattle owners to refrain from transporting cattle from one area to another to prevent the spread of the disease. While the government understood the effect the ban would have on the livelihoods of livestock owners, curbing the spread should take priority.

Industry stakeholders are calling on the government to provide programmes to create awareness and allocate enough budget and resources to assist in the organisation and implementation of control measures. Veterinarians, livestock producers and animal owners are the first line of defence against imported and other animal diseases. If SA is to retain its current red meat markets and gain new ones, biosecurity interventions and the traceability systems have to work.

The department of agriculture, land reform and rural development has called on the implementation of stringent hygiene practices across most farms in ...
Opinion
1 year ago

Although the blanket ban on livestock auctions has been lifted, strict measures to prevent new foot and mouth outbreaks will be enforced.
SebenzaLIVE
2 years ago

“Farmers can only be allowed to do online auctioning and trading; however the department will be making sure that no one is moving any animals."
News
2 years ago
Next Article