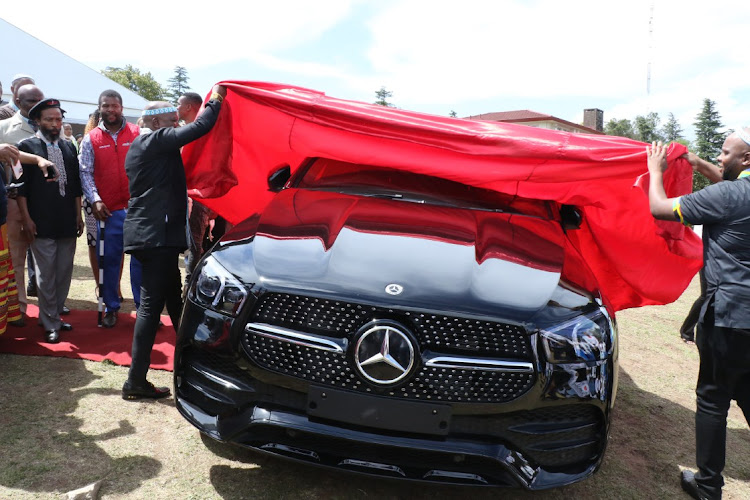 AbaThembu KIng Buyelekhaya Dalindyebo receives a special gift of a brand new SUV from the EFF and was handed over by EFF leader Juluis Malema at the king's Nkululekweni private residence in Mthatha on Saturday
Image: Lulamile Feni

The saying that about some being born born with a silver spoon in their mouths is being taken to new levels. It's now the platinum spoon, as seen by EFF gesture recently gifting a well-resourced person in King Buyelekhaya Dalindyebo with a vehicle worth millions.

Many of the king's subjects do not even have a proper roof above their heads so you can imagine how many houses could have sheltered the poor with that money.

No so long ago, during the looting spree of the VBS bank, some of the money was used to buy a helicopter for the king in Venda.

I am not against our kings receiving gifts as that is our culture. But their gifts must be weighed against the urgent needs of their subjects. Their sources must also be scrutinised.

In the case of the helicopter for the Venda King Toni Mphephu Ramabulana, the depositors at VBS were mostly vulnerable people largely concerned about saving for burial costs. This would mean these poor people were robbed to entertain their king with an expensive gift.

Think hard about that.

There was ululation and dancing as AbaThembu King Buyelekhaya Dalindyebo received his gift of an R1.8-million Mercedes from the EFF on Saturday.
News
2 months ago

Before the 2014 general elections he called on AbaThembu to vote for the DA, but King Buyelekhaya Dalindyebo has changed his tune and on Sunday urged ...
News
2 months ago
Next Article