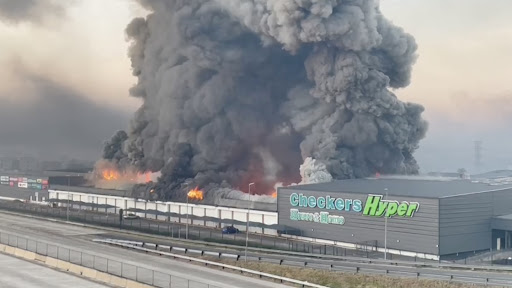 The Brookside Mall in Pietermaritzburg was one of the retail centres set ablaze by protesters during unrest and looting in KwaZulu-Natal in July. File photo.
Image: Twitter

Those who instigated the barbaric mayhem of destruction, killing and looting during July 2021 thought that we were as foolish as their brainless followers, and that we would turn against each other – all in the name of a convicted person!

It’s just a pity that the DA is working hard to cause racial divisions. We saw blacks, Indians, coloureds and whites standing in unison to protect their properties and infrastructure (malls). Communities shamed the workers of iniquity when they joined together to clean streets and malls.

Indeed, far from dividing us, the barbaric act encouraged by the likes of Duduzane Zuma, Julius Malema and Jimmy Manyi brought us together, we became aware that we really need each other to rebuild our beautiful country.

The Bible says, you reap what you sow. The time is coming when all these brainless thugs will pay dearly for destroying people’s livelihoods, done in the name of a convicted person for the glory of Satan!

People lost loved ones, killed in the mayhem. Yes, it’s nice for them to be sitting on looted couches, watching looted TVs and happily celebrating the proceeds of crime, enjoying at the cost of someone’s loss of income and someone’s loss of life!

Their day of reckoning is at hand. Actually, they need to be charged for treason, they are to be declared enemies of the state. There’s no excuse for thuggery.

Some residents in areas affected by the July riots have lost their livelihoods, have to travel far to get to the jobs that remain and walk long ...
News
1 month ago

Before the fatal shooting on July 29, activists had expressed grave concern over the manner of the recovery of looted goods.
News
2 months ago

Three months after small KwaZulu-Natal businesses were hit by civil unrest and looting, financial relief is finally on the way.
News
3 weeks ago

Sasria said it is determined to settle 80% of all claims between R1m and R30m by the end of October.
News
3 weeks ago
Next Article