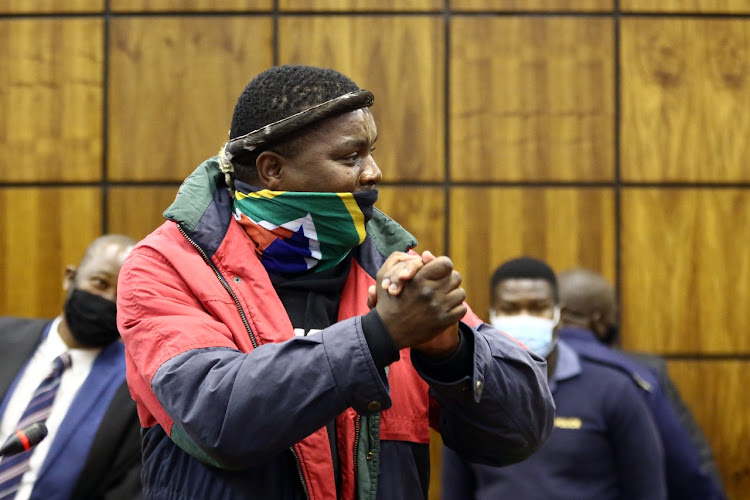 Former Ukhozi FM presenter Ngizwe Mchunu appearing at the Rundburg Magistrates court in Johannesburg. The writer says he and his ilk must be given the harshest punishment ever meted out against criminals and terrorists.
Image: Thapelo Morebudi

From being Mzansi's most revered radio personality, a role model for many up-and-coming wanna-be announcers and now being infamous for making headlines for all the wrong reasons.

This is what sums up erstwhile Ukhozi FM DJ Ngizwe "Macingwane" Mchunu's story up until he became Jacob Zuma's fierce loyalist or one of the most sought after 12 that are regarded as instigators of the recent riots.

And to learn that he was calling himself the "new president" befits an act of terrorism. Mchunu and his ilk must be given the harshest punishment ever meted out against criminals and terrorists.

To learn that when he appears in court next week Tuesday the NPA is going to oppose his bail application is like music to the ear. It's time that people who caused such irreparable damage to the economy of our country, that will take many years to recover, get punished accordingly.

We also have a Shoprite Usave franchise that was burnt down by irate locals who sought to be moved from Ngwathe municipality to Metsimaholo. We were stripped of the cheapest store ever. Some of those at the forefront of  burning Shoprite Usave have been "silenced" by authorities through being employed by the council while others were offered top jobs in  government entities instead of being sent to jail.

As we speak, there are no more demarcation fights in Heilbron. This is not what we want to see happening with the likes of Mchunu and other instigators. Let them suffer the consequences of their actions.

The four accused who appeared in courts in Gauteng for allegedly instigating a week of deadly violence “are lower than low hanging fruit”.
News
1 month ago

The NPA on Thursday said it does not have evidence that proves that those who have been arrested committed crimes against the state, treason or ...
News
1 month ago

The four suspects who have been apprehended in connection with the recent unrest are the key players in instigating violence in KwaZulu-Natal and ...
News
1 month ago
Next Article