Youth, use your collective power 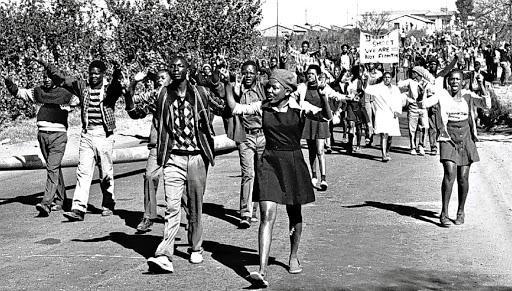 School children march through the streets of Soweto in 1976 to protest against the use of Afrikaans as a medium of instruction in black schools. The youth of today needs to be reminded of what power they hold if they stand as a collective, the writer says.
Image: Bongani Mnguni

This year marks the 45th anniversary of what is famously known as June 16. On this day we remember and honour the generation of 1976, who took the bull by the horns, spearheading a student uprising in Soweto, when young people protested against the imposition of Afrikaans by the apartheid regime as a medium of instruction.

Forty-five years is a long time and the mere fact that we still remember and commemorate this day should be a sign to all that power is in the hands of young people to make a difference in the society they live in. Young people should never put themselves down or think they cannot achieve goals.

I bet a R100 rand that the youth of 1976 did not imagine that they would be celebrated 45 years down the line for standing their ground and believing that they could make a difference.

Can you imagine what would have happened had they not said no to oppression? What would life be like today had the apartheid government not had a taste of a massive resistance like the one of the Soweto uprising. The youth of 1976 made history on that day, amidst tragedy and bloodshed none the less history was made.

The youth of today needs to be reminded of what power they hold if they stand as a collective. No violence is necessary but just through the search for solutions, through being a collective.

Social media makes things so easy these days and we stay connected, whether we like it or not. What a powerful tool to use just for hashtags and memes. Social media has proven that it can be used to bring about regime change and topple governments. Social media has been proven to be so powerful that it influences our thought process and the decisions we make.

How glorious it would be if this tool could be used to change negative thoughts into positive ones. To encourage youth to take care of the neighbourhoods in which they live in instead of waiting on government to do it for them.

How great if successful youths could share their stories of small but sustainable businesses that they started from their own one bedroom or shack dwelling and are benefiting their community.

No end in sight for youth unemployment

The month of June which is dedicated to the heroism of our youth against the apartheid regime started in a sorry state.
Opinion
7 months ago

Swinging clubs with the youth of Soweto