Murder has been normalised and glorified, including by state 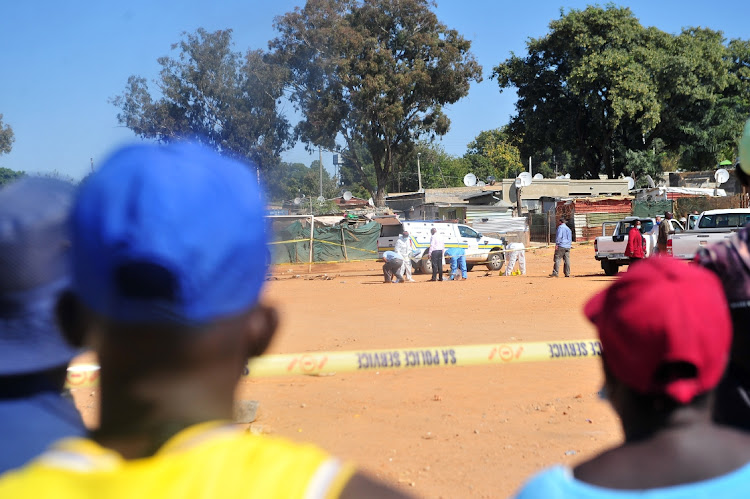 The community looks on as police and forensic pathologists clean the scene were four people were burned to death in Zandspruit. The group was necklaced by the community for allegedly committing a series of robberies in the township.
Image: Thulani Mbele

The recent reports about communities killing alleged criminals are not surprising or unexpected. In many townships and informal settlements, people die almost every day while the residents face the risk of violent death every day.

It is no wonder statistics about coronavirus deaths hardly move many of the people. In general, murder has become normal. Even the killing of men has been reduced to an insignificant crime compared to GBV or the abuse and/or killing of women by men. Seemingly, men can and must kill each other but they should spare women.

It is, therefore, safe to say there are categories of murder that are serious and murders that can be overlooked. In my shallow understanding, violence and murder among men will spill over to women, no matter how many campaigns are done.

Most people may think people who kill the most are poor and lawless but the greatest killers are governments through law enforcement agencies and armies. Joining the police and army is a legal way for a blood-thirsty murderer to kill and get away with it, provided it is lawful. More often than not, the security agencies have justification for murder through exemptions like classified information and self-defence.

A recent SAPS report clearly indicates that they cover up for each other, tamper with evidence and impede investigations including police killings. As it happens, in KZN, the police killed more than 1,000 civilians.

Elsewhere numbers are not so unlike police killings, rarely resulting in prosecutions of the offenders. Murder and killing have been idolised to the extent that video games initiate children to kill and destroy for as long as they can press "start" again. If one considers which movies or dramas are the most bankable, amateur research will show that it is the ones about mafias, criminal figures, ruthless action heroes and merciless historical figures.

These are the people who are honoured and respected rather than boring missionaries and pastors. If I am not mistaken, SA had its first Oscar for movie-making because of a movie honouring tsotsis. It is common for people to think that raising moral and sensitive men who treat women as eggs will result in non-killing men and women.

The truth is that it is the knights in shining armour who are the professional killers. Proof of that is in the statistics today. Oppressors of the past and present, black or white, spare only their own by protecting only themselves and loved ones and leaving ordinary people at the mercy of armed outlaws.

Drastic measures need to be taken urgently to restore law and order in our communities, otherwise residents will keep pushing the envelope with acts ...
Opinion
1 month ago

Anti-queer violence is an under-reported pandemic in SA

Gender-based violence and hate crimes against minorities continue to be the order of the day. Prior to the Covid-19 pandemic, the year 2020 began ...
Opinion
2 months ago

Mob justice is evidence that our society is sick