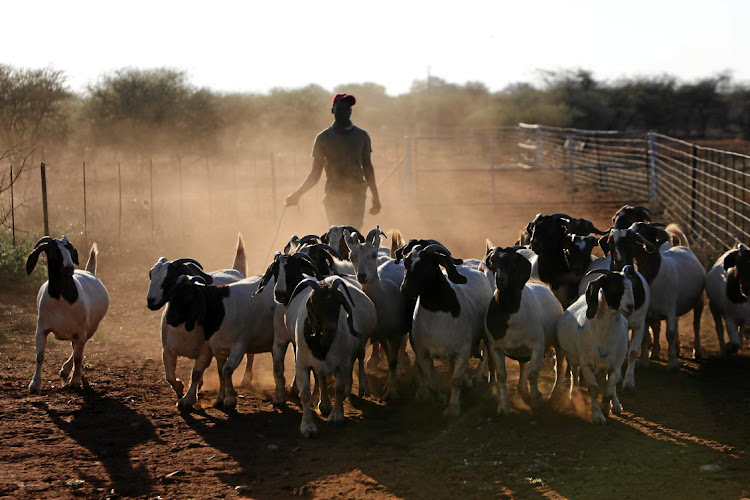 A goatherd and his group of grazers. Small-scale farmers stand to benefit from R1bn set aside to assist more than 75,000 farmers disrupted by Covid-19. File image.
Image: Alaister Russell

Minister Thoko Didiza’ s commitment to bring almost 10,000 agricultural extension officers will boost the development of land reform programmes beneficiaries and smallhold farmers. The minister’s intentions are a true inspiration towards the government commitment to rekindle the class of black commercial farmers which was deliberately destroyed by the Native Land Act of 1913.

The minister reiterated that during the Smallholder Horticulture Empowerment and Promotion approach (Shep) webinar in partnership with Japan International Cooperation Agency. The Shep is a programme geared to assist smallholder producers to increase their income through improving their productivity, better management of group dynamics, embracing the concept of farming as a business and for producers to start with a market as opposed to starting with production and seek markets thereafter.

It is clear that the roles of the agricultural extension officers and their evidence-based service they provide to Mzansi farmers will bring a dramatic change in the foreseeable future. The results are already showing up, the smallholder horticulture co-operatives like Ratanang Co-operative in Mankweng area in Limpopo  and Atlas Fresh Produce Primary Co-operative in Bulwer, KwaZulu-Natal are the recent beneficiaries who benefited from advisory services.

The co-operatives are also gaining more skills from the Shep programme. Upon partnering with Shep, they have managed to secure markets at the local level. Farmers are starting to realise the high potential of the horticulture sector and the concept of ‘farming as business'.

The minister acknowledges that there are critical areas which need to be addressed first before the sector becomes more inclusive and attractive. Such critical issues, the minister hinted, include access to land, water, extension and advisory services, finance, market and access to research and technology.

Job loss a blessing in disguise for Thusini

When Nontando Thusini was left unemployed after the company she was working for relocated to Gauteng, she started planting vegetables in her backyard.
SebenzaLIVE
2 weeks ago

Samson Mahlaba, 73, worked as a farm labourer for 50 years before realising his dream of becoming a commercial farmer five years ago.
SebenzaLIVE
1 month ago

When Beverly Mhlabane took a trip to the shop to buy eggs, little did she know by the time she returned home an idea would be hatched for her own ...
SebenzaLIVE
3 weeks ago
Next Article