EFF is still behind in political game 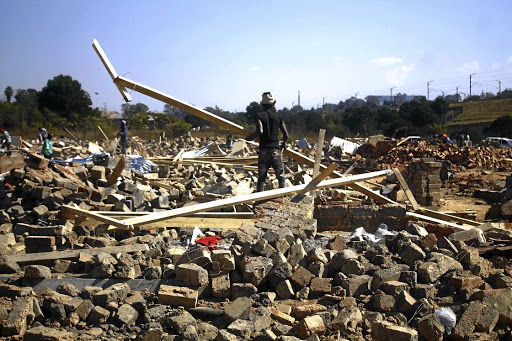 Alexandra residents pick up the pieces from the rubble after the Red Ants, backed by the Joburg Metro Police Department officers, demolished their illegally built homes.
Image: Kabelo Mokoena

The ANC has exposed the EFF that they are far from being equal with the ruling party.

First and foremost, the ANC used the community of Alexandra to help retreat from the pondokkies that they have been occupying.

The government covertly hired the Red Ants to destroy the Alexandra pondokkies and they did that as requested.

If and when the EFF had a powerful intelligence organisation, they could have been informed earlier about the destruction of the poor people's shacks three or five days before the operation took place.

EFF Gauteng provincial head Mandisa Mashego has denied that the EFF’s call for land occupations has impeded the City of Johannesburg’s ability to ...
News
3 years ago

Then the EFF could have been daily on the alert of "wafa-wafa", even though they do no have serious weapons to defend the masses. It would have been another "Sharpeville Massacre".

Probably now that the "big headed" [Julius] Malema is the boss at EFF, they discovered the "destruction of the pondokkies" late when the Red Ants were driving back to the "base" after the shacks were destroyed.

How can you form a political party without an intelligence organisation that is supposed to feed the party with first-class information?