Alex evictions prove that politicians only value citizens for their vote 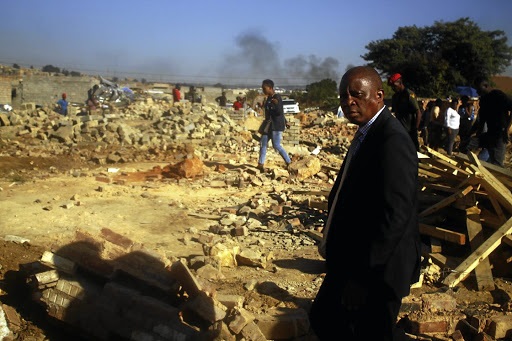 Johannesburg mayor Herman Mashaba has promised to rebuild the destroyed homes despite the structures being built illegally in Alexandra.
Image: KABELO MOKOENA

For the past 25 years, South Africans have been waiting for a "better life for all".

This better life was supposed to come through the democratic breakthrough that was championed by our forefathers. But things seem to be going in the opposite direction.

The people who are responsible for these setbacks are the very leaders that we have elected to serve and move us forward, not to enrich themselves.

In 2016, the people of Johannesburg elected the DA to lead them through a political pact with the EFF. As a result of this, Herman Mashaba was elected as the mayor of the City of Joburg.

The ANC in Johannesburg has slammed mayor Herman Mashaba, accusing him of “promoting illegality” when he promised to rebuild around 80 homes in ...
News
2 years ago

Since then Joburgers have not been happy with the way this man is treating them. This culminated in mass action marches in various constituencies on the eve of national elections last month.

Now, just days after elections, Alexandra residents were slapped with evection orders and the Red Ants were unleashed to demolish their homes.

The mayor did not account, instead he said he would investigate as to who issued the eviction order. This is insane, Mashaba thinks it's plausible that people could be evicted without the knowledge of the leadership of the city? The mayor must account.

I hope people have now realised that politicians only value them for their vote during elections, that is why they were punished with eviction right after the elections.