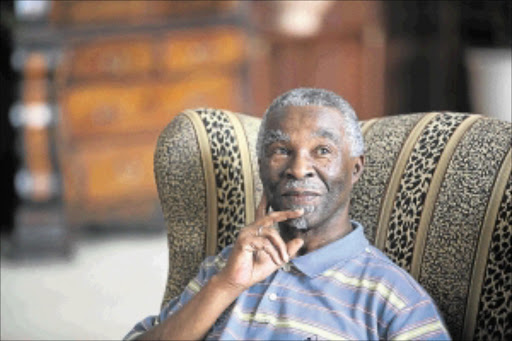 Under normal circumstances, I would understand former president Thabo Mbeki's argument that the ANC has abandoned its historical values on nonracialism. This stems from the party's stance in the debate on land redistribution.

Personally, I think intransigent whites have forced the ANC to change its tactics. Mbeki, as a veteran politician, should know there are times when you are forced to deviate from the norm.

The same Mbeki was deemed racist by virtue of his "I'm an African" speech. And his quiet diplomacy on Zimbabwe didn't endear him to these people.

Even the much-vaunted Freedom Charter stated clearly that the land belongs to all those who work and SA to all who live in it.

These racists are actively blocking black people's access to land. Farmworkers fit the category of people who work the land but by far the majority of them have no land. Landless people surely can't feel that they belong here.

Party no longer a representative of people, he says.
News
3 years ago

If Mbeki thinks AfriForum types will willingly share the land, he's very mistaken. Instead, AfriForum has resorted to propaganda that black South Africans are also settlers. They've gone the route of agitating Khoisan leaders. All of a sudden, some Khoisan elements have realised they own SA.

I wonder where were those Khoisan elements when black Africans were hanged and killed by ruthless apartheid security forces. They're nothing but a bunch of opportunists. Things can't go on like this.