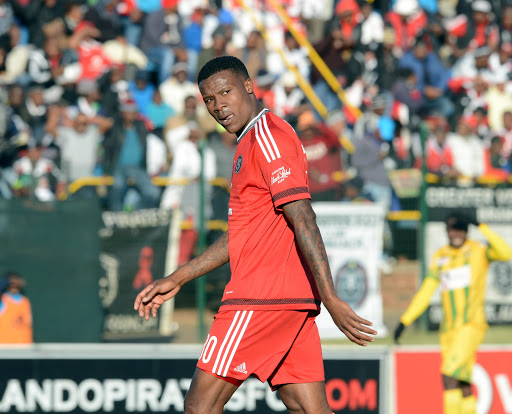 Orlando Pirates striker Thamsanqa Gabuza caused a stir this week when he lost his cool, took off his shirt, threw it into the crowd and then sought to substitute himself during Pirates' match against Black Leopards.

That kind of conduct has correctly been widely condemned, and there's no question that Gabuza should face further action for his antics.

He has come out to apologise, indicating he had grown frustrated at being booed by Pirates fans at Peter Mokaba Stadium following an early missed chance.

There are those who have argued that Gabuza should have composed himself in the face of derision and criticism, but others have stated fans need to know the limits as players are humans too, and can eventually crack when constantly ridiculed.

Gabuza has been ridiculed for too long and it's no surprise that he lost the plot. The abuse of players in this way has to stop.

The fact that fans pay their hard-earned money to travel to football matches cannot be sufficient excuse to subject a fellow human being to torment.

We call on our fans to exercise restraint, even when they are unhappy with performances of certain players. Has Gabuza been under-performing? Yes. But does he deserve to be abused? Absolutely not.

Gabuza was totally wrong to react to the boo brigade, because there's only one way for a player to silence his critics - by performing.

Thamsanqa Gabuza's rude celebration gesture towards the Orlando Pirates fans at the Peter Mokaba Stadium in Polokwane on Tuesday has been met with ...
Sport
3 years ago

The Premier Soccer League (PSL) and Orlando Pirates will both await the reports form the match commissioner and Bucs’ technical team before deciding ...
Sport
3 years ago

As speculation mounted yesterday over whether Thamsanqa Gabuza will don the Orlando Pirates jersey again.
Sport
3 years ago
Next Article