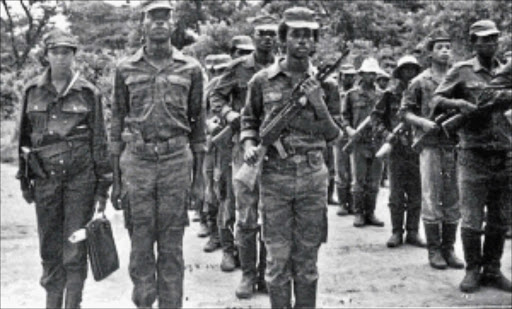 After the ANC was banned in 1960 thousands of its members went into exile, joining its military wing Umkhonto weSizwe in camps in several African countries.
Image: ZOLILE NQOSE COLLECTION

Remembering Motlalekhotso Sello, who died this day 32 years ago on 21 May 1986 in a shootout at a police roadblock between Makgobistat and Mahikeng not far from the Botswana border.

Sometime towards the end of the third month of my detention in John Vorster Square in 1986, Kaptein Van Niekerk came barging into my brightly lit cell late one night and threw a number of enlarged black and white photographs on the floor next to where I was lying on the hard mat trying once more to get some sleep, and with a smirk on his face he said, ‘You see what we do to your terrorist friends’.

The photos were of three dead bodies lying strewn on the ground at the side of a road. A photo he then shoved in my face was a close up of one of the dead and it looked like half the face had been shot off, but it did bear a resemblance to someone I knew by the name of Sello. I tried not to show any reaction and denied recognising the person but instinctive reactions of revulsion are virtually impossible to conceal.

Motlalekhotso Sello was part of the MK unit based in Lesotho that I had been working with over the past three years, and on my regular visits to Maseru for debriefings and further instruction every two or three months I got to know him a bit, even though as a rule we did not speak about our pasts. We were aiming to build up an underground presence in the Mount Fletcher district of what was then called Transkei and Motlalekhotso was the second trained MK soldier preparing to infiltrate into the region. He was an astute young man as he always gave me the impression that he was originally from Cape Town. It was only years later after my release from prison that I learned that he was actually from Mangolong village not far from where I was based at the time in Mehloloaneng.

State must foot the bill for apartheid 'killer' cops - Mayor

Thembisile Nkadimeng has joined forces with apartheid policement on trial for murder to force the state to pay their legal costs.
News
4 years ago

Then there was a military coup in Lesotho on 15 January 1986 when the head of the Lesotho Army, General Lekhanya, ousted Chief Leabua Jonathan, Prime Minister of Lesotho since independence from Britain in 1966. South African Foreign Minister, Pik Botha, speaking even before the coup was announced, said that Jonathan himself was the ‘single greatest destabiliser’ in Lesotho and accused him to trying to blackmail the West by threatening to turn to Communist countries for help. Citing Jonathan’s refusal to expel the ANC and allowing Lesotho to be used for attacks against its territory, the Apartheid regime imposed a border blockade on New year’s Day 1986, resulting in massive shortages of fuel and foodstuffs in Lesotho. South Africa of course denied playing any part in the coup, but lifted the border blockade within days of the coup.

And then, ten days later on 25 January, sixty members of the ANC were rounded up and deported from Lesotho to Zambia, including Motlalekhotso, Winston Harper (MK Henry Khumalo) and Sandi Jacobson (MK Milie Khumalo). Years later I remember Sandi saying how frightening and exhilarating the experience of flying over South Africa to Botswana on their way to Zambia had been, with SADF fighter jets accompanying them most of the way. There was a small number of MK operatives based in Maseru who did manage to escape the dragnet, including Ike Roji, but that’s another story.

Within less than four months, Motlalekhotso had already made his way to a new frontline, determined to enter the country and take on the might of the regime. After having jumped the border from Botswana on 21 May 1986, Motlalekhotso Sello (MK Unthathile Lethoko), Andile Mrumshe (MK Limbo Tshabalala) and Thembisile Mkhalipi (MK Jackson Modise) were killed at a police road block somewhere between Makgobistat and Mahikeng. They were buried as unidentified paupers at Mmabatho  cemetery and their bodies were only exhumed and identified twenty years later in July 2006.

Winnie Madikizela-Mandela and Thandi Modise carried guns on their first day in parliament as MPs‚ Modise has revealed.
News
4 years ago

It is likely that their remains would never have been recovered and finally returned to their families for reburial, if not for the sterling efforts of the NPAs Missing Persons' Task Team.

A dedicated freedom fighter and a young man in the prime of his life with a huge heart, all these years later when I close my eyes I can still see his face, not half shot up but with his beautiful smile, and I can still hear his infectious laugh. Motlalekhotso Sello made me feel human and in his presence, I forgot that I was white and knew we were equal and fighting for the same just cause on the same side of history. Salute Comrade. Hamba kahle Umkhonto