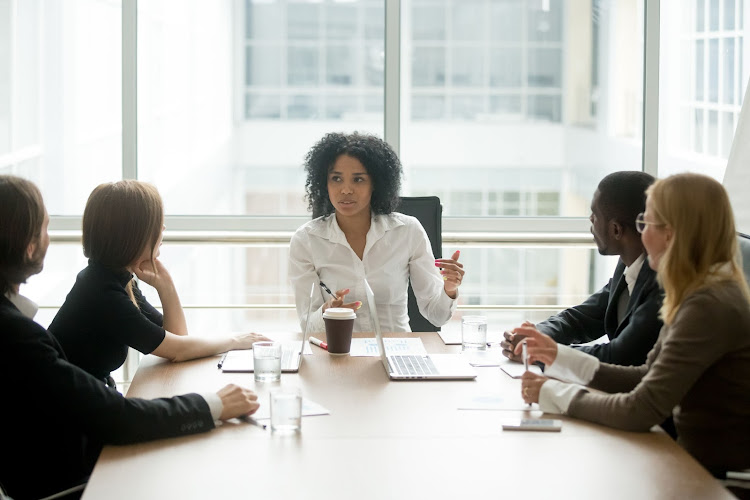 Although almost one third (29%) of senior roles in South Africa are now filled by women, one in five local businesses (20%) still have no women in senior positions.
Image: 123RF/ALEKSANDR DAVYDOV

As a feminist, your priority should be educating women on the need to be financially independent and self-sustainable. It is not your business to advise her on her sexuality, gender role, marriage or interactions with men. When a woman makes her own money, she is in a good position to decide the path her life should go.

She can easily decide to leave an abusive relationship as opposed to a woman who is poor and has nowhere to go. She can delve into her life's passion and indulgences (lifestyles) because she can afford it and doesn't have to ask for funds. She can raise her child alone.

Feminism should not be a competition to do what men do on a social level and it definitely should not be a frontal no-holds-barred attack on all males. Men are wired differently than women, so trying to usurp this biological fact will lead to chaos and confusion.

There is a reason men produce much more testosterone than women, why they are more sturdy, possess more bodily hair and more physical strength. It is purely nature prepping them for their roles. It is not a social construct. It is in their nature to take on life much more aggressively than we women. The male species of most mammals are more vicious, territorial and domineering than the females and humans are mammals. Do you think biology would exempt us?

A real feminist is more interested in getting women out of dependence of any kind. Every other doctrine stems purely from selfish inclinations and life experiences peculiar to the indoctrinator. While we may preach otherwise, a lot of women seek stability in marriage, no matter how much money they may have, no matter their online personality.

I am a conservative. This means I believe in the natural order of things. Long before the woke age, we have had homosexuality alongside heterosexuality but, of course, it was criminalised. In recent decades, the veil has been lifted and people of varying sexuality can live a normal life free from hate and prejudices but unfortunately, that is not enough for the woke people. They are now aggressively demanding that every human is gay. This is where you begin to question the motive.

Then we have feminists arguing that polyandry should be as accepted as monogamy. This is purely to spite and not for the general good of women. An understanding of human or animal nature will be exposed while it is difficult for women to tow the path of polyandry.

Careful study of the male species of mammals reveals that they are mostly polygamous in nature. Male mammals tend to want a harem of females to themselves, a character trait evident in men. Females, on the other hand, lean towards what is known as hypergamy – the desire for the most fit, successful and dominant male.

Men will want 10 average looking women at once just to feel good and women will want the best looking man among 10 men. Of course there are cases of peculiarities but these are few and far between. Asking women to be polyandrous is not only unrealistic but tasteless. Most women are not interested in having 10 boyfriends at once. Don't be a liar.

In a nutshell, a feminist who spends a lot of time telling you how to be obnoxious, insufferable and rude to men and spends less time teaching you how to turn those hundreds to millions is not really interested in your happiness. She is projecting a bitterness that is rooted deeply in her consciousness and may be a product of trauma and the only way to express it is to bite and claw.

• Mathebula is a Sowetan reader

Only way to end GBVF is to focus on prevention, cure

The only way to end GBVF is to focus on prevention as well as cure, and this will require all citizens to play their role in putting an end to this ...
Opinion
2 months ago

As we observed International Women's Day on Tuesday, it is sad that we did so in the midst of gender-based violence (GBV), femicide, ...
Opinion
2 months ago

As the world marks International Women’s Day to celebrate women’s achievements and to raise awareness on critical and sensitive issues that are still ...
Opinion
2 months ago
Next Article