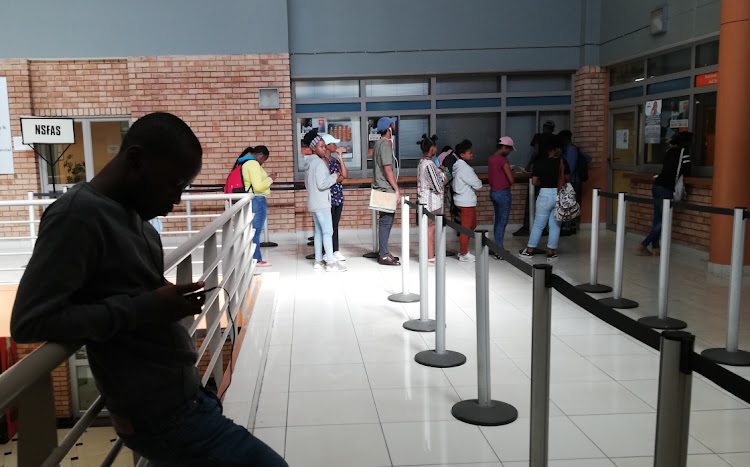 Students at University of Johannesburg, Doornfontein Campus queue at NSFAS offices. Students have complained that they have not received funds for meals and accommodation from NSFAS .
Image: THULANI MBELE

It was to be expected that the proposal by the National Student Financial Aid Scheme that students it funds should pass at least 75% of their modules would set the proverbial cat among the pigeons.

NSFAS made the suggestion in a document it presented during a consultative session regarding new funding policy, which was attended by student leaders from 26 public universities on Monday. If the proposal gets approved and adopted, it would mean that students dependent on and funded by the scheme will have to pass 75% pass of their courses to continue being funded by NSFAS.

But student formations have voiced their objections to the amendment. At present a 50% pass rate in the courses registered is enough for beneficiaries to continue enjoying the privilege of funding.

In its  presentation NSFAS said: “This requirement will become effective as of the 2023 academic year. This means that continuing students who are not first-time entering students in 2022 must achieve a 75% course pass rate for their 2022 studies in order to qualify as an eligible continuing student. Students who fail to meet this requirement will be allowed to appeal and [be] subject to the appeal criteria as specified in the policy standard.”

However, student organisations, or at least their leaders, were having none of it. We quoted the University of KwaZulu-Natal's SRC president Malusi Zuma saying the pass rate must remain at 50% as the proposed 75% will put more pressure on students.

“This is not fair for students because according to department of higher education, 50% is the required pass rate,” he said.

On face value the proposal is something to be welcomed, if only to maintain acceptable standards and stop the waste of scarce funds that excludes other poor but deserving students for whom this kind of financial aid is the only hope of escaping the poverty trap.

Commendable though it may be, we would hope that such a policy would be adopted only after all factors concerning the funding of students from poor backgrounds have been taken into consideration.

Was enough research carried out to establish the need for such a move and has the impact been fully considered? How much consultation has NSFAS carried out before reaching its position?  Would a gradual introduction on an ascending scale, starting first with, say, a 60-40 split, not have been a better proposition while not taking the eye off the ball of excellence?

We hope parties on both sides of the divide have an opportunity to talk and settle on a solution that is best for education and the country.

Students need a 75% pass of their modules in order to continue receiving funding from the National Student Financial Aid Scheme (NSFAS).
News
2 weeks ago
Next Article