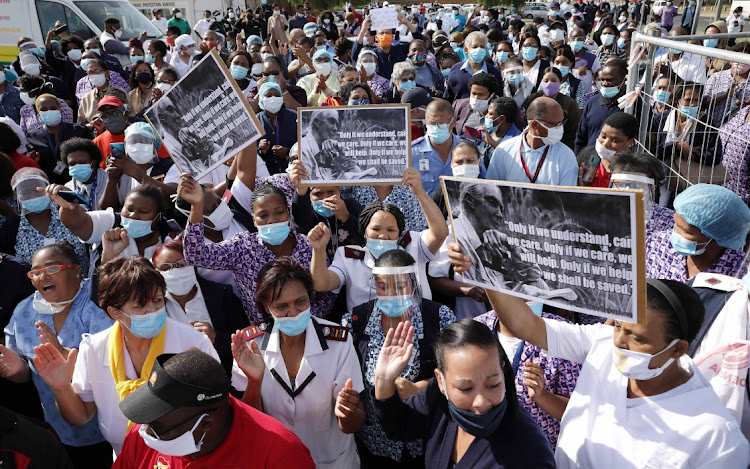 Health workers at Tygerberg Hospital in Cape Town protested on International Nurses Day last year for better working conditions after two of their colleagues died with Covid-19. Since then many others have died as the virus continues to spread.
Image: Esa Alexander

Just the other day – May 12, to be precise – the nation joined the rest of the globe to mark International Nurses Day. It is a day few would dare question the need for as humankind celebrates a noble profession born out of caring for others, with practitioners often placing their lives in danger.

Nurses the world over take the Nightingale pledge, a modified version of the Hippocratic oath. The pledge, composed in 1893, is named in honour of Florence Nightingale, the Lady with the Lamp who took care of the injured in the Crimean War. Nightingale is widely regarded as the mother of nursing.

Though the vast majority of nurses in this country have stuck to the pledge they took when they first joined nursing, we would be failing in our duty as the media if we did not highlight the unsavoury deeds of some rotten apples, which, unfortunately, seem to be increasing in number.

Sowetan's front page yesterday chronicled the horror visited on yet another family by staff at Bernice Samuel Hospital in Delmas, Mpumalanga. Deliwe Simelane had been dead for at least a week but staff nurses at the hospital had told her relatives that she was well and recovering when they paid the hospital visits to check up on her. In the end it was established that she had died the day after she was admitted.

The facility was featured on another front page story not too long ago, after Baby Lwandle had to have his arm amputated because nurses administered a drip incorrectly.

Before that we had told the story of Mandisa Mkhumbeni who was misdiagnosed with cervical cancer and now has to wear diapers as if she were a baby. To round off the recent horror tales Mbali Jiyane had to have her womb removed after a placenta was left inside her at the hospital.

As usual, the powers that be will make promises to “leave no stone unturned” in investigating the truth. The story will die a natural death until another horrific tale makes the news.

This kind of maiming and loss of lives is what leaves many sceptical about dreamy promises of the envisaged National Health Insurance while basic health care has been left to crumble.

Deliwe Simelane should be a name that goes down as a spark that lit the renewal of healthcare, especially by the state. But we know she will soon be forgotten with not so much as a finger lifted to improve the lot of the poor.

SA nurses struggle as we celebrate their special day

On Wednesday the world recognises Florence Nightingale's birthday, May 12, as International Nurses Day
News
1 year ago

Most people talk about Florence Nightingale today, but what about Mary Seacol?
Opinion
1 year ago

A Mpumalanga family went for days believing that their relative was recovering well at a hospital in Delmas, only to find her decomposed body in the ...
News
1 year ago
Next Article