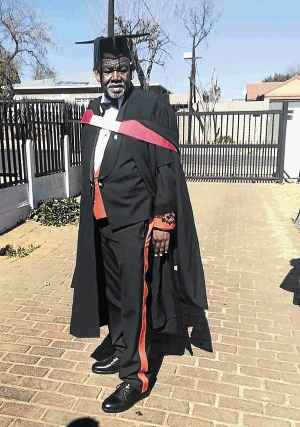 Proud ex-soldier Philip Dhlamini on Monday obtained his LLB degree at 69-years old. The writer says Dhlamini's story is a compelling reminder of many ordinary citizens in this country who, despite challenges or hardships, continue with their daily toll in the honest pursuit of their dreams.
Image: ANTONIO MUCHAVE

As a newspaper, we are the first to admit that the news cycle at the moment is a rather exceptionally gloomy one.

The rising infection rate and death toll of the Covid-19 pandemic is no longer a distant story of statistics.

For many South Africans, it has become a personal one of friends or families whose lives have been tragically changed forever.

The daily figures now tell a story of parents, siblings, aunts or uncles, even colleagues, who have succumbed to the invisible enemy wrecking our shores.

These, coupled with daily ills of corruption and violence, indeed have turned our national mood into a sombre one, tempted to fall into despair.

This is why we are deeply encouraged when we witness stories that remind us of our determination and drive to beat all odds.

A pensioner did not let rejection by the University of Limpopo (UL) to enrol as a student stop him from realising his dream of earning a law degree.
News
1 year ago

Yesterday, we told the story of pensioner Philip Dhlamini from Roodepoort, on the West Rand, who on Monday obtained his LLB degree at the age of 69 years.

After retiring from the army in 2013, Dhlamini would later make representation in court during a matter that involved his political party.

Clearly impressed, the judge suggested he study law, planting a seed that would later have Dhlamini pursue his degree.

Two years later, he enrolled as a full-time student, a journey he officially completed on Monday.

"I didn't hide my test or assignment results from fellow students whether I passed or failed because I would use that to encourage them to work hard. I would tell them that failing is an opportunity to study again and this time, better than before," he told this newspaper this week.

His story, while somewhat unique, is a compelling reminder of many ordinary citizens in this country who, despite challenges or hardships, continue with their daily toll in the honest pursuit of their dreams.

These are the people we ought to encourage and celebrate.

They remind us of our human tenacity and drive to create a better future for ourselves.

A decade of fostering a better future

Security guard qualifies with an LLB degree .
News
3 years ago

School to be named after icon Sam Nzima